A nonprofit group led by Lawrence resident and former radio personality Bill Lee has chosen the city to serve as the home for the newly conceived Kansas Music Hall of Fame.

"Lawrence has had the best music scene in the state for years, so it just seems like it should be here," said Lee, who serves as the group's president. "There has always been more bands working out of this town than any other in the state."

The group doesn't yet have a building for the hall of fame and may not for quite a while, Lee said. Instead, the group is in the process of selling memberships to the organization and planning for its first induction ceremony.

Lee, who was program manager at KLWN and KLZR for 11 years in the late 1970s and 1980s, said the group likely would induct five to seven musicians into the hall at a ceremony on Jan. 15 at Liberty Hall.

But longer-term plans for the hall may give the city's tourism industry a boost. Lee said several states have created a museum as part of their halls of fame.

"I hope it eventually becomes an attraction for the city," Lee said. "We're going to start putting together a collection of memorabilia that we can exhibit.

"At this point we don't have any specific time frame, but we want to do it as soon as we can get it done. But if it takes us five or 10 years, we're not going to worry about it." 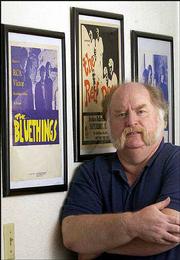 Until a permanent home can be found, Lee said the organization would promote the induction ceremonies and concerts and create temporary exhibits of memorabilia at various Lawrence locations.

States have had varying levels of success in establishing viable music halls of fame. Nebraska has had an organization for about five years but is still seeking a building, Lee said. Georgia has one of the largest, a 43,000-square-foot, interactive facility in Macon that attracts about 40,000 visitors a year.

Mary Alice Applegate, communications and marketing manager for the Georgia hall of fame, said the facility was becoming a more important part of her state's tourism scene.

"We strive to be a major heritage tourism location," Applegate said. "That is sort of a new trend in the tourism industry. People want to know more about their state's heritage.

"A place like this helps them reconnect and the great thing about music is that it is universal. You're going to find that just about everybody likes some type of music."

The Georgia hall of fame receives state funding and has a budget of $1.1 million. Lee said his group wouldn't seek state funding. Instead, it hopes to raise money largely through fund-raisers and donations. It is selling memberships, which are priced from $25 to "as much as anybody will give us."

Lee said the Kansas hall would honor a variety of music genres but likely would have a heavy emphasis on rock 'n roll.

"We'll probably be recognizing rockers because it has been the primary form of popular music, and like any hall of fame, fame has something to do with it," Lee said.

Lee said the group hasn't chosen its first class, but will have plenty of choices. He said in addition to honoring musicians from throughout Kansas, it also will honor musicians who have ties to the Kansas City metro area. He said the national Rock and Roll Hall of Fame and Museum in Cleveland has two members from the area -- Big Joe Turner, who had the hit "Shake, Rattle and Roll" in the 1950s, and Gene Clark, a former Bonner Springs resident who was a member of The Byrds.