Artists who gather once a week at Senior Center for camaraderie, critiques will be among participants in 2004 Lawrence ArtWalk

By By Kendall Dix

Members of the Downtown Tuesday Painters gather each Tuesday to work on their art and socialize at the Senior Center, 745 Vt. From left are Charlotte Neese, Eudora, Ann Martin and Millie Peters, both of Lawrence. The painters' studio will be a stop on the 2004 Lawrence ArtWalk.

As members of the Downtown Tuesday Painters quietly chat, Carole Peters dips her brush into her watercolor palette and carefully applies paint to her canvas. Her mother, Millie Peters, concentrates intensely on her own painting across the ring of tables.

Carole once lived halfway across the country. Her mother convinced her to join the Downtown Tuesday Painters about nine years ago, when Carole retired and moved home to Lawrence from New Jersey. Now the two retirees get together once a week to paint.

"I roped her in because we were such a small group then," says Millie, a founding member of the group. "We don't have that problem anymore."

Around the tables, the group feels more like a conglomeration of old friends than an art club. In fact, the artists do things together outside their weekly meetings and have even taken group painting trips to places like Oklahoma and Arkansas. In many ways, the Downtown Tuesday Painters are as much a support group as a social club, says Carole, who remembers being welcomed warmly when she joined.

"Sometimes we try to help solve each other's problems," she says, "like if some group member has an illness in the family."

The group now boasts about 20 members and meets every Tuesday morning at the Senior Center, 745 Vt. This month, the artists are displaying about 30 pieces at the Lawrence Public Library, 707 Vt., and the group's studio will be a stop on the 10th annual Lawrence ArtWalk, set for next weekend.

The self-guided ArtWalk will feature the work of more than 90 artists at 41 locations in and around Lawrence. Visitors will be able to interact with the artists in their private studios.

The Tuesday Downtown Painters will have three or four artists at a time painting in their studio. Two- and three-dimensional works will be on view and available for sale. Group member Charlotte Neese says there will be a theme to the paintings on display.

"This year we've been trying to paint pictures with a local feel because of the sesquicentennial," she says.

Neese hopes the addition of a free ridership day on the "T," the city bus system, during the first day of the ArtWalk will increase attendance. Those who make it to the Downtown Tuesday Painters' studio won't be disappointed, she says.

"We see the improvement in our work," Neese says. "Everyone is helpful to each other, and we all critique each other's work." 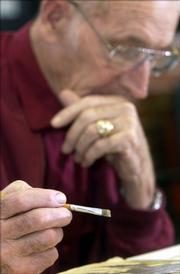 Members of the Downtown Tuesday Painters gather each Tuesday to work on their art and socialize at the Senior Center, 745 Vt. Last week, Bill Radtke, Lawrence, contemplated a work in progress to decide where to paint next.

Each member of the group has a reason for attending the meetings. Dar Williams, who was recruited by fellow oil painter Neese, says the best part about the Tuesday Downtown Painters is getting the support and opinions of her fellow artists.

Jim Patti is the fastest painter in the group and cranks out a piece every week. He says that although he has plenty to do, the group provides a good way to get out of the house.

Bill Radtke, the group's newest member, says he was looking for something to do when a neighbor suggested he join the group.

But don't confuse the Downtown Tuesday Painters with just another activities session at the senior center. Though the group is composed of retirees and meets at the center, group members are quick to point out that they are self-sufficient.

"The senior center has been good to us," Neese says, "but we are our own group, and we manage ourselves."

Millie says Lawrence artist Laurie Culling helped transform the group from an informal collection of people taking painting classes at the senior center to the 20-member Tuesday Downtown Painters of today. The group, which Millie helped start 20 or 25 years ago, now even has a business card bearing the Downtown Tuesday Painters logo.

Carole says the group helps to dispel the preconception that the senior center is little more than a day care for the elderly.

"Some people may think we're just down here drawing with crayons," Carole says. "We may be growing old, but our art is growing with us."