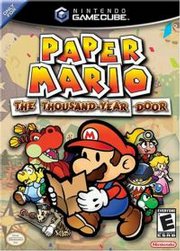 Paper Mario for the Nintendo 64 blew onto the RPG scene and took the genre in a quirky new direction. Mario and Luigi's Superstar Saga for the Game Boy Advance, while not a true sequel, expanded on the RPG idea to much success. Now, the Gamecube gets a stellar, quirky and amazing addition to the Paper Mario series with The Thousand-Year Door.

Paper Mario TTYD has Mario on a quest, following a treasure map he received from Princess Peach to find seven stars to open up a mysterious portal. Sound familiar? Yeah, it's the same 'ol bag from Nintendo, but unlike Super Mario Sunshine, the dialogue in Paper Mario is intelligent in its humor. Don't be intimidated by Nintendo's cartoon-ish design; the one-liners and personalities you come across in Paper Mario are hilarious for all ages.

The game is flat. No, literally. All characters in Paper Mario are two-dimensional drawings roaming around in a top-down view world. The art design strays from the RPG norm and couldn't be more refreshing.

Not only does the art design stray from the RPG norm, but so does the gameplay. Like Superstar Saga, the battle system is turn based, but with interactivity during the attacks. For instance, if you select to hit an enemy with a weapon, you can let go of the analog stick at a precise moment to increase your attack. The same goes for defense. When attacked, you don't have to just sit there while you take a pummeling or waste a turn based defensive move. With a simple tap of a button, you can defend or even try the harder, yet more rewarding, counter attack. Timing is key in this battle system and the synergy of turn based battle and action couldn't be more fluid. You also have an audience to please this time around. If you vary up your attacks or make them stylish, the audience will applaud, awarding you by filling a super meter that will eventually allow you to coordinate a variety of special moves. But watch out, there are riff-raff in the audience that may try to throw objects at you to distract you.

Outside of the battle system, Mario can learn several abilities to take advantage of his paper-thin status. He can flatten to get through thin areas, fold into a paper airplane to float to hard-to reach areas, make himself a sailboat, scrunch small to launch himself into a super jump and other abilities. You do pick up friends along the way to fight with you. And you can change the order in which they take turns on the fly, to conserve energy or coordinate a better attack plan. There are also several upgrades in the form of badges you come across during your journey to augment your attack, defense or otherwise. The Paper Mario system is robust.

It is in Paper Mario's simplicity that its genius is displayed. Any fan of action or RPG games can pick this up for immediate fun. But by the end of the title, you realize how deep the game really is and how smooth the game made it seem.

Paper Mario's greatness gets hampered in the second half of the game with a handful of tedious, mandatory side quests that have you fetching and back-tracking with no real sense of furthering or accomplishment. It really seems like these were tacked on for the sole purpose of lengthening the game, which it didn't necessarily need.

The sound is a mixed bag. No voice acting and some Casio themes pervade. However, the more robust themes do eventually kick in, with more current sounding orchestrations of old Mario themes. Nintendo seems to be finally stepping on into the current generation of music. The graphics, while a beautiful art style, don't show tremendous advancement form the N64 incarnation. This isn't necessarily a terrible thing, but the lack of inspiration in presenting the art style needs to be remedied next time around. That being said, there are an endless amount of enemies you will encounter, most of which have truly inspired designs. Even when there are almost 100 enemies on screen at once, the framerate doesn't ever stutter.

Paper Mario: The Thousand-Year Door is a remarkable game with hours of solid fun. Nintendo loves for its games' gameplay to speak for themselves, louder than the sometimes lack of presentation polish. This, my friend, is a perfect example.