Man that is soooo last year. 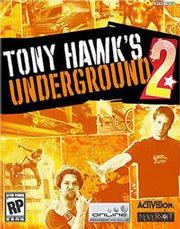 The Tony Hawk series got its start several years ago, pioneering insane skateboarding tricks to see it peak in 2001's Tony Hawk's Pro Skater 4. Last year, we saw the change of pace in the series with the new Underground mantra. It added a story mode and the ability to get off your board and roam around freely on foot. It was a good change of pace, but the franchise did show signs of aging despite the new digs. Tony Hawk's Underground 2 is proof positive that the series reached its peak last year.

In THUG 2, you can immediately delve into create-a-skater and the new create-a-graphic mode. Essentially, you can create your own graffiti that you can spread all over the walls in the THUG kingdom. Also new are various vehicles you can pilot by taking control of other skaters and their rides. Most of them are nothing more than a different skin with the same skateboarding mechanics.

New moves include focus, a slow-motion feature that lets you appreciate the tough tricks you pull off. Also, Freak-out lets you button mash after you wipe out, trying to fill up a freak meter. You will be rewarded with a certain amount of refill on your special meter that you lost, depending on how far you get the Freak-out meter to rise. You are then treated to a small animation of your character breaking his skateboard in different ways. New skate mechanics include sticker slap, which allows you to jump off walls in the opposite direction for a new twist on combos. Also, you can perform spins on rounded objects to sake things up.

THUG two has two main modes. Story mode and Classic mode which allows you to play as if it were the old Tony Hawk games, collecting letters and special tapes without going through the story mode. This year's story mode has you starting on Tony Hawk's team, opposite Jackass's Bam Margera and his team. The goal is to travel the world, do amazing tricks and win specific missions, doing it better than the other team. The loser "pays for the trip."

The story mode has you traversing on foot missions a lot, where THUG 1 got clunky, not living up to the skating polish. The same is evident in THUG 2, as the story mode strays even more away from the skating mechanics the series does best. Climbing, jumping and strafing on ledges don't live up to third-person action standards and is a minor detraction from an otherwise decent story mode jam-packed with things to do. The only problem is, it doesn't take too long for the familiar feeling to set in, reminding you too often of last year's effort.

The Classic mode is as polished as it can be, and still proves to be fun in small doses. The extreme sports genre peaked quicker than everyone thought in video game land with both SSX 3 and THUG 1. It seems as if developer Neversoft wanted to pack everything into THUG 2 as they prepare for their new venture. Neversoft stated earlier this year that they are moving forward with a new, non-Tony-Hawk franchise of the first-person shooter variety. They didn't confirm that Tony Hawk is officially on permanent vacation, but I'd have trouble seeing them truly justify another $49.99 version of the series.

I expected to hear the same neo or classic punk upon playing. Well, I did. But, they threw some awesome Sinatra and Johnny Cash tunes in there along with other left field artists to really mix it up. It's a much welcomed addition to the soundtrack. The graphics haven't changed much in two years. The locales and characters have a lot of variety, but I said the same thing last year. Variety is the spice of life, sure. But the same variety isn't necessarily original.

THUG 2 is worth the face value if you just can't get your extreme skating fill, especially if you never tried its predecessor. Standing alone, it's a solid title that promises fun. Standing with its fellow titles in the series, it's not a huge improvement.