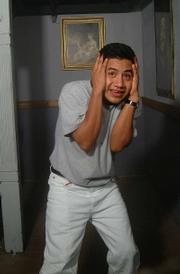 Candids from The Beast

The haunted house industry is a kill-or-be-killed enterprise, and Kansas City is no exception to the rule. Fear factories have come and gone in the Midwest's fright capital for years, but three The Edge of Hell (since 1975), The Beast (1991) and Catacombs have emerged as the dopest domiciles of distress. To ascertain which dreadful dwelling most deserves your devil-be-damned dollars, Lawrence.com reporter Richard Gintowt haunted the ghastly West Bottoms of Kansas City and cast himself into the plague-ridden jaws of these three hellish hoosegows: 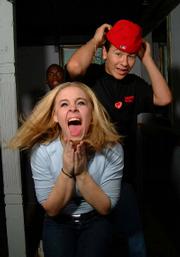 The Beast supposedly totes the ultimate talons of terror, but hyperbole is about as common in this business as blood clots on a chainsaw victim. This den of 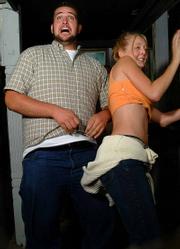 demon-inflicted denizens is distinguished by its "open-format" design, which is code for "you're going to be in here a lot longer than you expected." Case in point: a father who emerged with only one-third of his six-member pack. 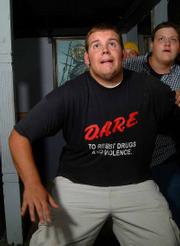 The Beast's intricate scenery comes with a catch if you stop and look, you're gonna get it. About 50 ghouls, witches, gargoyles and other scary-types lurk in impossible-to-see corners. Sometimes they'll flat-out floor you with a cat-like pounce from the shadows; other times they'll just trail you and breathe on your neck for awhile. For some reason most of them feel compelled to jabber in bad British accents.

As one pack of high school freshman discovered, the best line of defense is ganging up on the ghouls or swearing at them. The clear winner of this particular smear-fest was "Your mama's coochie is nasty," uttered by a precocious little pre-teen boy at a sword-wielding ninja ghoul.

Besides the animatronic puppets of death that seemingly pop out of every open hallway, the path is littered with tornado-caliber quick bursts of air and even some piped-in smells. The topper is a four-story slide that shoots your wax-paper-covered ass down a steeper-than-the-dickens slope into a posh landing pad, where employees yell at you to "GET UP!" before some urine-soaked adolescent knocks your teeth out. 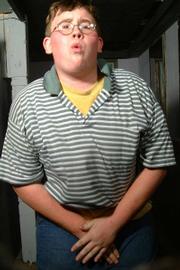 Conclusion: No matter how many times you tell yourself "It's all fake," The Beast will scare you senseless for 45-75 minutes (maze dependent). Pre-show bathroom stop highly encouraged.
Richard Gintowt

Kansas City's longest-running haunted house is also its most claustrophobic. The Edge of Hell will make you duck, crawl, prod, poke and whimper your way through a tunneling path that is easier to navigate than The Beast's but tighter. Compared to the low-light surroundings of The Beast, The Edge of Hell is a virtual cave, with total blackness accompanying nearly half of your journey.

These days, however, it's easier than ever to return from The Edge of Hell just bring a cell phone along. Though these blue-tinted cheating devices can accelerate your progress, they can also inspire the ire of those around you who want the most bang for their 17 bucks. And everyone knows that only wussy chowderheads cheat, you wussy chowderhead.

As far as scare tactics go, The Edge of Hell isn't really that different than The Beast spring-loaded puppets pop out of paintings, chatty ghouls accost you and ask you to "join them for dinner" etc. and ornate illusions tempt you to hesitate long enough to be accosted by another machete-toting freak. Highlights include a 20-foot live anaconda, a chainsaw massacre, an Indiana Jones-style rope bridge and an awesome five-story corkscrew slide to the bottom.

To get the most out of your Edge of Hell experience, be sure to spend some time with the legendary Ratman, who usually hangs out in front if he's not chasing someone down the street to the gas station. As his name suggests, Ratman has rats : which he puts in his mouth (seriously, live ones that's a fact.). "There ain't no trick to it, dude," he says. "They sit in there and (wave their hands around) and bite you and it's up to you to keep a straight face."

Conclusion: If you've gonna pick only one haunted house, go to The Beast it's longer and more unpredictable. But don't forget to stop by The Edge of Hell and visit Ratman.
Richard Gintowt 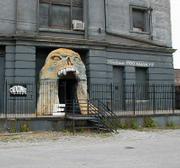 Catacombs is the biggest competitor of The Beast and The Edge of Hell (which are both owned by the same parent company). At 60-90 minutes, its biggest selling point is its length. Unfortunately, its quantity far exceeds its quality.

The most notable shortcoming of Catacombs is its set design. The "grisly" murder scenes play out like bad B-movie sets charming but barely frightening. The house features none of the animatronics that The Beast and The Edge of Hell so effectively employ, and mechanized scenes come off as stiff and unthreatening (case in point: a bobbing head with a steel pole in plain sight).

Another shortcoming is the enthusiasm of the house's inhabitants. Most of the "ghouls" are just teenagers dressed in plain street clothes and white face paint (juggalos?). Some of them try to scare you; some of them don't. The lack of distinction between the ghouls and the paying customers was such that one unruffled pre-teen actually asked this plain-clothes reporter if he was "part of the show."

One demographic that will probably be scared witless by Catacombs, however, is knee replacement patients. Staircase after staircase leads you through the house's 50-plus rooms, many of which are connected by crawl-through tunnels.

Highlights include a strobe-lit hall of mirrors and a couple of mazes that are genuinely difficult to navigate (though this task is considerably less difficult when large clumps of people work to find the "secret door"). By far the coolest leg of the journey is walking through a balance-afflicting tunnel with fiber optic lights circling all around you, followed by a rope bridge that's a virtual carbon copy of The Edge of Hell's.

To be fair, haunted house experiences vary with each trip. Another pass through Catacombs could have yielded more scares and fewer shortcomings, and certainly there are plenty of kids who will come out perfectly pee-stained. But this particular fright-fest offered too few jitters and too many groans. 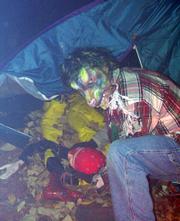 Inside Worlds of Fun's "Camp Gonnagitcha"

Forget The Beast, The Edge of Hell, the Catacombs. Been there, done that. And anyway, the old guard of Kansas City haunted houses are simply too expensive for just a couple hours of wandering around in the dark.

This year the best boos for your buck is at Worlds of Fun.

The amusement park atmosphere is obviously a different dynamic than the drive through the dark downtown KC bottoms to get to the 12th Street haunted houses. But the four exceptional attractions at Worlds of Fun will make you scream, cringe and jump just as much (if not more) than their well-worn cross-town counterparts.

This year, Worlds of Fun extended its season and launched three new frightful adventures -- the Lore of the Vampire, the Fright Zone and Camp Gonnagitcha Witchahatchet -- in addition to last year's addition, the Carnival of Carnivorous Clowns.

Get to the park after 4 p.m., even if you plan on hitting up the rides. You'll still have plenty of time to lose your dinner on the roller coasters and have the bejeezus scared out of you. And at that time, the $36.95 ticket price drops to $16.95, about the same price as just one of the bottoms' haunted houses.

Action begins while it is still daylight at the Lore of the Vampires. The Lore opens at 3 p.m. with high school letter jackets and Abercrombie-clad teens cramming into line, which was by far longer than lines to any of the park's rides.

Since the Lore (what used to be the Orient Express take-off post) is practically all indoors, you don't really notice that it is still daytime until you hit the halfway point and walk through an outdoor graveyard to the second and more gory part of the Lore. The amazing costumes and Hollywood-caliber makeup of the Vampires caught my eye right away, but it took a second walk through for me to take in all of the intricate details -- like the so-called 'feast of fingers.'

When you get to Carnival of Carnivorous Clowns, invest the $1 it costs to buy the 3-D glasses. Wearing them creates a surreal, dream-like trip to an arcade with the Insane Clown Posse and Chucky. The spinning tunnel at the end is the highlight of this house and is well worth the wait in line.

Fright Zone lacks the obligatory mazes common at the downtown houses, and instead floods the freakish space with fog. Once the park turns off the lights in this area and machine-made fog starts pouring in, be sure to keep your friends close -- otherwise you'll likely lose them.

When you first walk through the gates to the Fright Zone it feels like squatters have taken over the park. The fog enables them to sneak up on you and creep you out with noises that leave you wondering where they came from.

On my way up to Camp Gonnagitcha, there were not only a couple young children crying, but also some teenagers shrieking and sobbing with her friends as they left. The life-like walk through the woods make you think twice about camping out anywhere but your backyard.

Overall the only thing I missed from the downtown haunted houses was the climax when you'd tear off a piece of wax paper and take a trip down the multiple-story slide back into the real world. But really, the slides pale in comparison to the gamut of rides at Worlds of Fun.
Ellyn Angelotti

The 'bad' British is usually because you're in an area that requires it....like London Town, the Pub, or the Castle.

Hoping you'll come through again next year...we can always use the extra toys...I mean customers.