All that you can leave behind

Orphaned Anniversary members reform as The Only Children 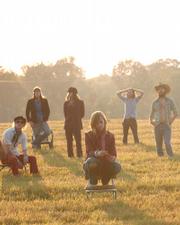 Straight from the bottle.

That's how Josh Berwanger, lead singer and songwriter of The Only Children, takes his whiskey.

And in couple months, a vodka ad in Jane Magazine will reveal how the rest of The Only Children take their liqour. Concurrently, an ad in Teen Vogue Magazine will encourage fans to download a ring tone for the band's first single "Change of Living."

All of which points to one thing...

"I really am at the point where I don't give a fuck," said Berwanger, as he knocked back a Budweiser and a slice of pizza a couple hours before his new band embarked on its first tour. "If I have to do a vodka commercial ... I know my songs are true and I know our band is true and I know that I'm not selling myself short."

"If someone who's a fan of ours reads (Jane) I'm going to call them a pussy anyways."

No more Anniversaries
These days, Berwanger and company need all the exposure a new band can get. After a seven-year run with The Anniversary, Berwanger watched his band internally disintegrate in the midst of playing 1,000-seat venues with the likes of Guided By Voices, Dashboard Confessional and Cheap Trick. Sensing the imminent collapse of The Anniversary, Berwanger did what any smart singer/songwriter would do - he stole the rhythm section and split.

"Jim, Janko and I were always kind of hanging out together, so when (The Anniversary) broke up, it was natural that us three play together," he said, referring to bassist Jim David and drummer Christian "Janko" Jankowski.

(The split left Anniversary members Justin Roelofs and Adrienne Verhoeven jobless, though Verhoeven has recently been spotted with a new incarnation of The Gadjits called Architects.)

More on the Only Children including a review of this album

While The Anniversary excelled at molding multiple songwriting visions into a coherent whole, the band's delicate balance of power may ultimately have signaled its demise. The band's final home recordings indicated that Berwanger and Roelofs were headed in completely different directions, with little room for compromise.

"You know, someone told me a long time ago, 'You're in a band with two songwriters - it's not going to work,'" Berwanger said. "In the beginning it wasn't hard, but that's just because we had nothing and so it was just like, 'Go for it.'"

Unbroken circle
By the time word spread of The Anniversary's official breakup, The Only Children - then known as "Josh Berwanger and the Holy Ghosts" - were already hard at work on a new batch of songs. Longtime friend and blues guitarist TK Webb offered to move back to Lawrence from Brooklyn and join the band as a full-time member, and Hot Rod Circuit's Casey Prestwood - an accomplished pedal steel guitarist - volunteered as much time and effort as he could expend.

With the last-minute addition of singer/keyboardist Heidi-Lynne Gluck (via Indianapolis), The Only Children were ready to hit the studio and record an album. The band caravanned to a remote mountain studio in Colorado and spent three weeks recording its debut album "Change of Living."

By all accounts, the experience was as much a spiritual awakening as a recording session.

"We'd wake up and someone would make breakfast for everyone, and we'd all make a fire together," Prestwood recalls. "If Josh was working on a song, me, Jim and Janko would hike up to the peak of a mountain."

The resulting album is a celebration of newfound friendship and rebirth. Its 10 songs recall Bob Dylan's "Nashville Skyline" or The Nitty Gritty Dirt Band's "Will the Circle Be Unbroken" - heartfelt songs of love, rambling and yearning performed with a rock-solid rhythm section and an authentic tradition-steeped twang.

"I felt like I finally had something to really sing about," Berwanger said. "On some Anniversary songs I was more writing from after like reading a book - you know, coming from somewhere else instead of myself. This record is more personal for me."

Jerky river
The band's current tour - which began Sept. 14 at the Hurricane in Kansas City and ends Oct. 23 at the Bottleneck - has served as a wake-up call for a band that's essentially starting from scratch.

According to Berwanger, who checked in with lawrence.com as the band was passing through Myrtle Beach en route to a show in Greenville, NC, the tour has been tough so far.

"It's our first tour - I wasn't expecting it to be fucking awesome or anything," said Berwanger, who estimated the band was playing for an average of 20 people a night. "The good thing is that every show we play at least half the audience buys CDs ... the bummer is, half the audience is usually seven people."

To add insult to injury, the band's new bus has suffered a handful of breakdowns, forcing them to cancel three shows.

"We ended up driving one night straight from Arizona to the middle of Texas and about six hours from our destination it was so hot that the axle melted," Berwanger explained.

"We were stuck in the desert pretty much for about eight hours - hot as hell, with no food ... we've been pretty much broke, living off of whiskey and beef jerky."

Spirits figure to pick up as The Only Children visit the CMJ Festival in New York City and return to Lawrence to close out the tour. The band's album will come out nationwide on Nov. 2.

One thing the band always can count on, however, is being constantly entertained by the ever-jocular Janko.

"I don't know where it came from, but all of a sudden I started talking like Freddy Krueger and so we bought a mask and a glove and a hat," Jankowski said. "It's worth it ... I'd rather be doing this than sitting around Lawrence and working."

A band of their own
At the urging of the band's new label Glurp Records (also home to Grand Champeen, The Deathray Davies, Li'l Cap'n Travis), The Only Children are still being promoted with the "featuring former members of The Anniversary" tag.

Though Berwanger is sympathetic to doing whatever it takes to gain a new audience, it's a tag he'd just as soon leave behind.

"If ten more kids are going to get to hear these songs because of that's on there, then that's fine," he said. "In three years, if that's still on there ... I'm throwing the sheets in - I'm done."

anyone know the reason why the anniversary really broke up?

Funny how the Anniversary broke up just cuz Ade couldn't keep her knickers on. Typical.