When veteran restaurateur Bob Schumm opened Buffalo Bob's Smokehouse in downtown Lawrence in 1977, he had the city's barbecue market to himself. 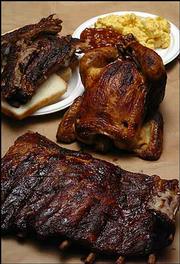 Lawrence residents no longer need to drive to Kansas City to find barbecued fare such as these ribs and chicken. Lawrence has six establishments that are ready to help satisfy cravings for smoked meats.

"I liked barbecue. I experienced it in the Kansas City area, and I thought it would work very well in Lawrence," said Schumm, whose restaurant is at 719 Mass.

The decades since Buffalo Bob's opened 27 years ago have proven Schumm right: Lawrence is indeed fertile ground for barbecue.

The number of restaurants whose menus are built around barbecue offerings has crept upward in recent years to the point that the city now boasts six such establishments serving up an array of ribs, brisket and burnt ends.

Which raises the question: Has Lawrence -- dwelling in the shadow of the Kansas City area, one of the nation's beloved barbecue capitals -- suddenly become a barbecue town?

Well, that might be an overstatement. Lawrence hasn't yet established itself a reputation as a barbecue destination. But, according to owners and managers of Lawrence barbecue joints, the city seems pointed in the right direction.

"I would say it's definitely on its way," said James Patterson, manager of Vermont Street BBQ, 728 Mass.

"When I moved here, everybody said there wasn't much barbecue in Lawrence and they had to drive to Kansas City. That's pretty much why Yale and Shad (Yale Baker and Shad Woodworth, Vermont Street's original co-owners) said they opened up the old shop (at 805 Vt.). They were tired of driving to Kansas City."

Thanks to the steady increase of barbecue entries in Lawrence, there's more reason for the city's residents to satisfy their cravings for the smoky, slow-cooked fare much closer to home.

Next to Buffalo Bob's Smokehouse, the oldest barbecue establishment in town is Quick's Bar-B-Que and Catering Co., 1527 W. Sixth St.

Ron and Janet Quick opened the restaurant in November 1995. But the Quick family had already built a name for itself in Kansas City-area barbecue.

Ron's brother, Ed McLain, operates the family's restaurant in Kansas City, Kan., which has been in business since 1964.

Ron opened a restaurant in Lawrence because he saw an opportunity here.

"There's more than 50 barbecues in Kansas City. Looking at how many there are there, I thought, why not try something different? I thought Lawrence needs a good barbecue," he said.

"Mainly because the area wasn't saturated with barbecue, that's really why we came. I think we've done OK. It's been a fast nine years. It just went by -- boom."

Today, Ron Quick finds himself in a much more crowded field. He now faces not one barbecue competitor (Buffalo Bob's), but five.

Is that too many for Lawrence to support?

"We're getting close to being saturated. We're on the border, we don't need any more. I'd say it's (the increase in barbecue offerings) been going on probably for the last four years. They've slowly been creeping in," Ron Quick said.

But he said it wasn't the number of his barbecue competitors that concerned him. More troubling is the overall number of restaurants in town.

"The barbecues don't bother me. We each do our own thing, and we're all a little bit different. But the fact that there are so many restaurants, period, that affects you whether you're (serving) barbecue or not," he said.

'The more, the merrier'

With so many barbecue options in town, it's more important for owners to do something to distinguish themselves in a crowded market.

The way to accomplish that, they said, is to do something better than the other guys.

That's the approach taken by Brad Ziegler and Doug Holiday, co-owners of Bigg's Bar & Grill, 2429 Iowa, which opened Sept. 1 in the former location of Molly McGee's.

"Hospitality is what we're really after. We're in the hospitality business, and food is the first and foremost thing. We focus on barbecue, but we don't really look at ourselves as (being) in competition with other barbecue restaurants. We're in competition with other restaurants (overall)," said Holiday, formerly the general manger of the Hereford House, 4931 W. Sixth St.

Courtee Smith Jr., owner of Gran-Daddy's Que Meats & Sauces, 913 N. Second St., said his business stood out from the competition by focusing solely on barbecue -- no burgers, salads or other diversions from smoked meats.

"I know there's a lot of the bar-and-grill type settings that provide one particular type of barbecue, but (it's) not their entire menu," he said.

Aside from spare ribs, the specialty at Gran-Daddy's is Da Bomb: shredded brisket, smothered in barbecue sauce and served on a bun.

"They're doing pretty good," Smith said of demand for the hearty sandwich.

"Here's my philosophy. You can't do anything about the other guy; all you can do is make the best product that you can," he said. "You just make sure you take care of your business. You keep an open ear to it (competition), but the more, the merrier."

Some restaurateurs said they questioned whether Lawrence is really on its way to becoming a true barbecue town.

"I wouldn't categorize it as that. I would say we are definitely a huge, casual dining-out market, and, of course, barbecue is the casual, dining-out food," Schumm said.

"There's been some natural increase of population in Lawrence, so we can obviously handle more food service operations. But I don't see any defining trend that this is becoming the barbecue capital of Kansas."

Rather, he said, the barbecue format is simply the last restaurant category to be fully exploited by in Lawrence. That follows on the heels of multiple entries of Mexican, Chinese and bar and grills.

"The restaurants in Lawrence seem to congregate around the same things: a lot of Mexican restaurants ... a lot of pizza. Now barbecue restaurants are opening up," said Walker, who bought Pat's Blue Rib'n from the previous owners about two months ago.

Like Schumm, Walker said that Lawrence is a town that leans heavily toward casual dining. And the population includes thousands of college students who typically seek out inexpensive eats.

"Barbecue is popular with kids. It's cheap, it's casual and it's hearty," Walker said.

Meanwhile, Lawrence's barbecue lovers get to enjoy more choices without having to travel outside the city for the taste of slow-smoked ribs, chicken, turkey and sausage.

"I don't think people are having to go to Kansas City to find great barbecue anymore. There's a wide enough variety (here) so that you will be able to find something you will like," Walker said.