By By Sarah Fox

The mother of four was so hip that the high school students crowded around her for autographs.

"She just kind of touched me in the spot that I loved," Lawrence High School junior Tyron Mumford said of hearing the poetry of jessica Care moore-poole, who doesn't capitalize her first and last names. "She talks about black power and stuff. I understand what she's saying." 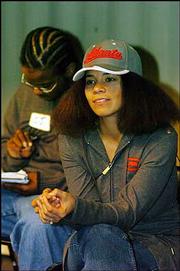 Publisher, poet and playwright jessica Care moore-poole works with Lawrence High School students, trying to get them to write and speak a poem that they created.

The Atlanta woman then directed the 28 students to write poems and read them out loud.

"It's been amazing some of the stuff that comes out of their pens and out of their hearts," she said after the workshop.

The 32-year-old, who grew up in Detroit, studied journalism and political science during college and now makes a living performing poetry. She also is CEO of Moore Black Press, which primarily publishes poetry.

When she was growing up, she produced poems about boys breaking her heart but later realized "there were more important things to write about," she told the students Wednesday.

She read the students several of her poems, on topics ranging from fighting the stereotypes toward black men to a woman who jumped to her death with her three children in New York City.

The high schoolers scribbled down poems describing their own streets after listening to moore-poole's description of one of her old neighborhoods, 158th Street in Harlem.

Mumford wrote a poem about West 13th Street in Lawrence, including how his neighbors stare and whisper when he wears his hair Afro style.

"They tell my mom they love new people on the block," the 17-year-old wrote. "So I'm not saying they don't like me or my mom. But maybe I need to make the first step: 'Hi.'"

The students also wrote poems on current events, ranging from the draft to gay marriage.

"If you're a poet, you have to care about things -- you have to be up on politics," moore-poole told them. "I'm very biased, I'm very anti-Bush."

"I'm amazed at how full of imagery their poems are and how intimate they are," Tate said. "These poems exist in them just below the surface."

Moore-poole's visit to Lawrence was funded by the National Endowment for the Humanities, the Langston Hughes National Poetry Project, Van Go Mobile Arts, LHS and CJHS.