Kansas University professor Bill Tsutsui recalls lying on the shag carpeting of his family's rec room in the 1970s, anxiously staring at the Zenith while the "Creature Double Feature" was about to air on a Houston UHF station.

"I twisted my mother's arm -- and she was not much of a seamstress -- until she would make me a Godzilla costume," he remembers. "This costume was actually hilarious. It was a 1970s green nylon thing. If you had smoked a cigarette within 50 feet of it I probably would have gone up in flames. It had a long tail and these semi-dorsal fins, which she had cut up pillow foam rubber to make the tail. She dyed a pair of my grandmother's church gloves green.

"I thought I was the greatest thing since sliced bread. That's before I went to the Halloween fun fair and everybody made fun of me and tore my tail."

Tsutsui is finally getting his revenge.

On Thursday, a three-day conference organized by the professor of Japanese history is set to kick off. "In Godzilla's Footsteps: Japanese Pop Culture Icons on the Global Stage" will feature a film festival dedicated to the towering radioactive beast, along with speeches and panel discussions with experts in the field.

"I think we have the big-name scholars from all over the country who work on Japanese popular culture," says Tsutsui, author of the book, "Godzilla on My Mind." "None of whom probably would have admitted before this they had any interest in Godzilla, but when we put the call out, they all responded yes."

Gateway to the East

Those who weren't raised on the dozens of post-1950s films that saw the King of the Monsters duking it out with giant foes such as Mothra, Megalon and Ghidorah, might be asking one question about this international symposium: Why Godzilla?

"Before Godzilla, when Americans thought of Japan, they thought of World War II," Tsutsui explains. "But Godzilla really offers us a lot of cultural insight into Japanese culture since World War II, and to ourselves as to why we as Americans respond to this guy in a rubber suit trashing Japanese cities."

"We had a very good response," says Ito, a KU librarian for Japanese studies. "We thought we could do it on a larger scale. We thought the globalization of Japanese popular culture through Godzilla would be a good topic for the conference."

Unlike Tsutsui, Ito had little knowledge of Godzilla, despite growing up in Nagoya, Japan. She judged the film series to be "cheap stuff for kids." It was only after college that she began to appreciate the material.

"I was a girl and not into monsters. I much prefer anime or manga (comic books)," she says. "Somehow I got a tape from a professor in Japan saying it was really good. I was already a grown-up, and I did not like Godzilla movies at all. But after watching the tape, I was shocked that it was so great."

A three-day scholarly conference celebrates the 50th anniversary of the release of the original Godzilla film.

Ito considers the 1954 original "Gojira" her favorite, and that is one of a trio of pictures audiences will be able to enjoy during free festival screenings at Liberty Hall, 642 Mass.

"The director (IshirÃ' Honda) had gone through Hiroshima not long after the bombings," Tsutsui says of the movie that launched the franchise. "He'd seen the damage. He wanted the film to be a serious anti-nuclear statement."

In Japan, this work is deemed a classic on a par with how Americans view "King Kong." In fact, the film received the equivalent of a Japanese Academy Award nomination upon its release, but lost to Akira Kurosawa's "The Seven Samurai" -- long regarded as one of the greatest films of all time.

Also showing is "Godzilla vs. Hedorah" aka "Godzilla vs. the Smog Monster." The 1971 flick is an outrageously trippy production that introduces an anti-pollution theme.

"It's actually one of the most violent of the films," Tsutsui describes. "I think that's why some people really like it and some people don't."

One of the newest Godzilla projects will make its Lawrence debut. Tsutsui claims the 2001 effort "Godzilla, Mothra and King Ghidorah: Giant Monsters All-Out Attack" features better special effects and a more sophisticated story line than the childhood "Creature Features" he grew up with. 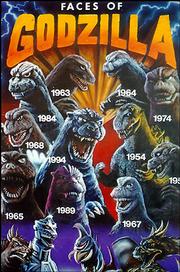 He says, "Like many of the latest films, it is strongly influenced by the aesthetics and conventions of anime; it also contains mystical elements and a strong female lead -- also responses to contemporary Japanese pop culture trends."

Duties of the host

Tsutsui believes Lawrence is a perfect location for "In Godzilla's Footsteps," despite the city's modest size.

"I think it's great because the whole community can get involved," he says. "In New York or Los Angeles -- places where there are quite large communities of fans -- it could just become lost in the buzz of what was happening in those towns. But in Lawrence it can be the center of attention."

Even though Lawrence has never been the site of a Godzilla movie (in production or in the onscreen destruction thereof), one resident has been involved with a related project for more than a decade.

Local filmmaker Roger Holden has cultivated a professional relationship with Yoshimitsu Banno, the director of "Godzilla vs. the Smog Monster," and even recruited the man to come to Lawrence several years ago to speak.

"More recently I was invited by Mr. Banno to go to Toho Films (in Japan) and present an idea for a Godzilla movie," Holden recalls. "It was called 'Godzilla 2001' and was about Godzilla fighting a virtual reality monster. We kept in touch throughout the years, and we are working on a really amazing top secret project now."

Holden considers "In Godzilla's Footsteps" a fitting tribute to a cultural icon that doesn't always receive the respect it deserves.

"During the holidays, they always run the movie 'It's a Wonderful Life,'" he explains. "In that movie Jimmy Stewart is shown how the world would be if he had not been born. With this conference, it's the same thing: It's hard to imagine the world as we know it today if there had not been a Godzilla."