But the longsuffering residents of Stull are another story 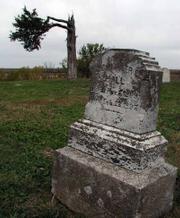 Old Stull Cemetary located a few miles from the widely known Stull cemetary, which is located in Stull proper.

The Devil's played some pretty mean pranks on the town of Stull, Kan.

According to the urban legends surrounding the tiny town just west of Lawrence, he's chosen Stull's cemetery as a place to appear every Halloween (or Spring Solstice, or Winter Solstice, etc).

Just kidding on that last one.

"There's no devil down here," said one 79-year old woman who lives nearby and has nearly a dozen relatives buried at the cemetery (name withheld on request). "The only devils we have are the two-legged ones who write stories about it." 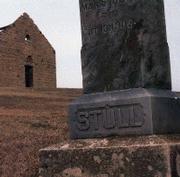 Stull Cemetary, circa 1990 before the church house was leveled. 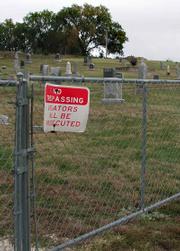 Stull Cemetary today. The pile of limestone rubble on the horizon toward the right is the remains of the church house.

Though not all of the town's residents feel so burdened by the legends that surround the "haunted" cemetery and the ensuing throngs of curiosity seekers, there is certainly an argument to be made for leaving Stull -- or any reputedly haunted cementary -- alone.

"It's just a big old hoax that somebody started and we want it stopped," said the otherwise friendly cemetery-goer, who has had the graves of her relatives vandalized repeatedly.

"Go bowling or something ... leave our cemetery alone."

For the people who have endured the Stull saga firsthand, the only thing frightening about the "legend" is the fact that their 1867 limestone church has been reduced to a pile of rubble and their cemetery is now on 24-hour lockdown, requiring constant patrolling from the county sheriff.

Their bitter sentiments stem from stolen gravestones, vandalism and obnoxious thrill-seekers who use the myths as an excuse to grab a 12-pack and party Stull-style.

"That first year, I tell you, it was terrible - 500 people standing on graves, hoping that devil would come up," said the woman, who has been known to keep patrolling cops company and even chase out trespassers herself. "One man wrote and said a relative of mine was a werewolf, and that really made me mad."

On March 29 (Good Friday) 2002, the old brick church came tumbling down. Thus was the "portal to hell" closed.

John Haase was the property owner who sent his friend up the hill that day with a "rubber-tired highloader" hell-bent on putting the rumors to rest. According to Haase, a second wall had recently fallen down on the old brick church, making the dilapidated brick building a potential hazard for anyone who dared mess with it.

"The sense was that if kids showed up there was a real likelihood that one of the walls might go," Haase said. "All he did was just give it a nudge and the whole thing came down."

The demolition promptly killed any hope of restoring the historic building - an effort which had been sauntering for years without financial backing or full community support. 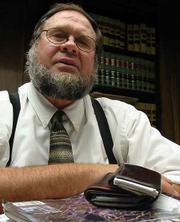 John Solbach, attorney and Stull's former state representative: "This story about it being haunted just tears the guts out of people. I knew a man whose son was buried there. Some people came out there to have Halloween fun and they tipped over his son's tombstone. He found that out and he broke down and just cried like a baby." 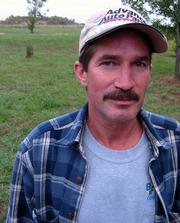 Stull-area resident David Nicholson: "Me and my cousin used to drink beer in there when we was 16 and we never heard nothin'. I heard there was people that did little weird worships and shit but I never seen 'em ... I'll be buried there and then it might be haunted." 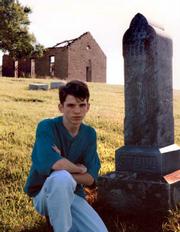 Former Topeka-area high school student Rob Gillaspie (seen here posing for his 1994 senior picture): "I don't know what's more TERRIFYING... the fact that I'm wearing white pants in this picture, or the fact that they demolished a historic landmark. THE HORRROR!" 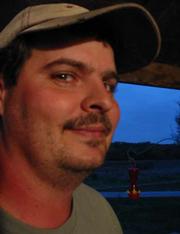 Stull-area resident Mike Muntzert: "I've seen people park a mile-and-a-half past that intersection and walk. You see a lot of people walking through the ditches trying to jump a couple fences." 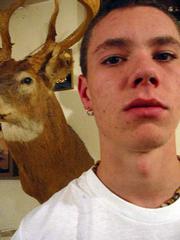 Perry High School student and Stull-area resident Josh Bockover: "I was down there for five minutes, thought it was boring, and went to another party in Lawrence." 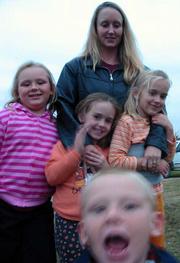 Stull-area resident Denise Johnson with her four kids (left to right) Hali Messick, Macayla Johnson, Rylan Messick, Ashlynn Johnson. She remembers 94 Country encouraging people to head to Stull for Halloween (she called and informed listeners that the 'gateway' church had been knocked down).

For John Solbach, a Lecompton resident who served 14 years as a state representative in the area, the county lost more than an old church that day.

"A lot of history fell with that building," said Solbach, who urged the property's previous owner to leave the church standing. "Those who wanted to see it preserved were heartsick that it was destroyed."

With the much-mythologized church gone, attention turned to preventing vandalism of the adjunct graveyard. A fence was erected along the street and pasted with 'no trespassing' signs. According to Scott McPherson, juvenile offender attorney for the Douglas County District Attorney's office, trespassing on Stull cemetary could bring maximum fines of $1,000 and up to six months in jail. McPherson said he recalled "three or four" juveniles who were arrested for trespassing on the cemetary last year.

John Solbach says he's seen firsthand the trials of friends who have relatives buried in that cemetery.

"This story about it being haunted just tears the guts out of people," he said. "I knew a man whose son was buried there. Some people came out there to have Halloween fun and they tipped over his son's tombstone. He found that out and he broke down and just cried like a baby."

Gossip is the devil's plaything

Stull's graveyard probably offers about the same nil odds of turning up Satan as any other graveyard. But truth isn't what has driven people to the roadside graveyard for the better part of three decades.

Rumors abound about the origins of Stull's supernatural reputation, and most can be refuted as quickly as they are invented. One theory said the devil appears because of the stabbing death of the town's mayor in 1850. Only problem: the town was settled in 1856 ... and has never had a mayor.

In the opinion of Paul Mirecki, chair of KU's department of religious studies, the Stull myths are simply creative machinations of over-imaginative troublemakers.

"I would put this in the same category as the UFO people," said Mirecki, who said that he knew of no allusions to "portals to hell" in the Bible.

The stories have been perpetuated by amateur websites and the local press (about 20 University Daily Kansan articles have appeared in the last three decades). Popular glam rockers Urge Overkill did their part to play up the legend when they released "Stull EP" in 1993.

Denise Johnson, a Lecompton resident who grew up in Ottawa, has a simple explanation for the area's enduring fascination with Stull.

"We were just bored teenagers looking for something to do, " she said. "It was the cool thing to do."

Hell is all around us

The Devil's greatest prank in Stull, however, may be setting a red herring.

According to Mark Kasson, president and CEO of Free State Credit Union, the real haunted cemetery is not the one that's fenced off at Stull's main intersection - it's a different cemetery a couple miles away.

"All the college students - the kids from out of town that hear this stuff - they're going to go to the one on the side of the road," said Kasson, who grew up in Lawrence and haunted to the "real" Stull as a teenager.

"Those are the ones who are vandalizing it," he said, "probably because they're not getting what they came for."

Like most people who have ever ventured to Stull to see what all the fuss is about, Kasson does not actually believe that Satan appears in either cemetery. But he does remember the stories he heard as a teenager - about how Stull was supposedly the middle point of some kind of Satanic triangle and was responsible for converting some fundamental Christian kid from Baldwin into a Satan worshipper.

Despite his allegiance to the "real" Stull, Kasson admits that it probably doesn't matter which cemetery people go to.

"Most of the time the kids were intoxicated enough you could end up in a cemetery on Daisy Hill and you'd still think it's Stull," he joked.

Maybe that's not such a bad idea. 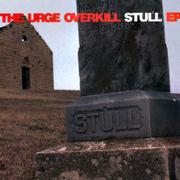 "Forty miles west of Kansas City / Down a county road like a lonely soul I see Sharon and I see Jack / It's me and Roman dressed in black, Tell my bride to bury me in Stull" - "Stull (Pt. 1)"from Urge Overkill's 1993 "Stull EP."

Amazing! Shocking!! The undead take Randy's senior party at Stull by storm!!! Watch the footage of Randy at Stull two ways: streaming off the site or download by using the little right click button on your mouse and choosing "save to disk." Watch the video

Tom King contributed to this article.