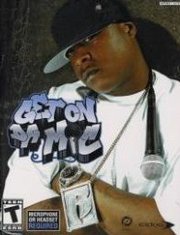 Get On Da Mic had a vision to do for the rap and hip hop genre what Karaoke Revolution was doing for everything else. It provides over 40 of the genre's more recognized hip hop hits and has you competing for accuracy in rhythm instead of being on pitch. What results is a pretty unrefined concept that should've been fairly fun with some minor tweaks.

"Baby Got Back," "Rapper's Delight," Nutin but a G Thang," "The Humpty Dance" and "Push it" are just some of the tracks you may be familiar with in the game. As you gain recognition and do well in local battles, you can earn your way to the big arenas.

Unfortunately not fixing minor things can have major repercussions. As the lyrics flash on two separate lines, there is no real indicator for people unfamiliar with the song what to sing when. Since the game is based purely on rhythm and how the recording does it, it's certain that anyone not hip to the song will fail miserably. What's even worse is that the songs on the game aren't performed by the original artists and most of them are performed differently. So even if you know the song like the back of your hand, you have to learn how the generic artist performs it first. Even when your rhythm perfectly matches some of the songs, you can score low with no indication as to why.

Since this is the core gameplay mechanic, it pretty much breaks the entire game. The characters you encounter and the way you can customize yourself all have semi-interesting tidbits of entertainment value, but all are fairly nominal in light of the paltry gameplay mechanics.

There's not much else to say, since there is not much else you can do with the game. I think the idea has merit for the audience Eidos is trying to reach, but a working prompting system and faithful reproduction of the hits are a great place to start.