Is it 'Saturday Night Live' or Memorex?

On one of the more "edgy" episodes of "The Brady Bunch," Greg Brady lands a deal with a swarthy record label that wants him to change his name to Johnny Bravo en route to becoming a rock star.

When hunky Greg hears rough mixes of his album, he notices that his own vocals have been replaced by those of someone else. He angrily asks the executives why they don't just hire that singer to be Johnny Bravo if they're unhappy with his performance.

The response: "Because you fit the suit."

As with most nascent pop stars in America, Ashlee Simpson fits the suit.

Like many who were watching "Saturday Night Live" last week, I doubled over with laughter when Simpson came out to perform her second song, "Autobiography," and the vocals from her previous track "Pieces of Me" began playing instead. All she could do was comedically dance for a few seconds, then slink off the stage as the camera focused on the barely hidden smirks of her live band.

It was a classic moment of lip-synched exposure -- right up there with the Milli Vanilli debacle -- proving that this pop empress has no clothes.

But it stopped being funny when she returned for the closing sign-off and host Jude Law gave her the opportunity to explain herself.

Wow, Ashlee. Way to take responsibility for your own lack of talent by blaming your hired bandmates -- who actually were playing live.

The fallout from this incident and its poorly thought-out explanations immediately followed.

At first, her label, Geffen Records, issued a statement that said pretaped electronic percussion from "Pieces of Me" had accidentally been triggered by the anonymous drummer in Simpson's quartet. 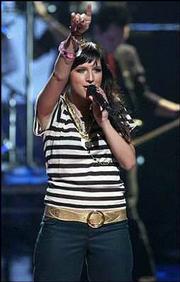 Teen diva Ashlee Simpson performs "live" during one of her incessant appearances on network television.

Then when it became obvious that the press was not going to buy this bogus explanation, Simpson changed her tune. She claimed to need a "guide vocal" because an ongoing battle with acid reflux disease had made her voice hoarse.

"Just like any artist in America, she has a backing track that she pushes so you don't have to hear her croak through a song on national television," claimed her manager-father Joe Simpson.

So now, not only was the Simpson clan criticizing her band, they were also insulting every "artist in America."

As a former pro soundman, let me make this clear to those who think some industry secret has been exposed. The majority of artists in America DON'T use pre-recorded guide vocals. It's only the majority of pre-packaged, style-over-substance, midriff-baring, Justin Timberlake-dating bimbos who use these vocal aids.

Fortunately, Simpson was offered almost instant redemption when she got to perform before an audience at Monday's Radio Music Awards. The show was broadcast live on NBC, and it began with her pretending to flub up "Autobiography" then saying, "Just kidding." (The joke had an even less spontaneous sense of comic timing than when John Kerry made that Tony Soprano quip during the last debate.)

Credit goes to Simpson for actually showing up and singing for real. This was fairly apparent to the viewer because the brunette bombshell was appalling. She had no range, lacked control and skewed flat throughout the performance. And her clunky onstage moves were almost harder to watch than the facial contortions of her older sister, dim diva Jessica Simpson.

The younger Simpson is now the barometer for what separates a manufactured product from a musician. The lines between legitimate artists and teenybopper no-talents such as Britney Spears, Avril Lavigne and Simpson had almost entirely blurred. Now there is at least some public debate about differentiating the contenders from the pretenders.

Do chart-toppers such as Sheryl Crow, Alanis Morissette or Fantasia Barrino use guide vocals? Not a chance, because they all can actually sing.

But backtracking a bit. It's surprising how this lip-synch stink was allowed to happen in the first place. "Saturday Night Live" prides itself on being a LIVE SHOW. If host Jude Law had gotten acid reflux, it's inconceivable that the program would tape his comedy bits and rebroadcast them as if they were happening in front of an audience. It should be a mandatory requirement of the veteran series that every guest artist play with live mics. If they can't agree to this minimal requirement -- well, that's what videos are for.

Here's one more question to ponder that no one has bothered to ask: Is the voice on the infamous guide track really that of Ashlee Simpson?