The undead are still haunting area multiplexes, whether in the form of the gory remake "Dawn of the Dead" or comedic import "Shaun of the Dead." 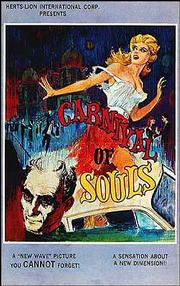 An original theatrical poster for 1962's "Carnival of Souls" describes the horror film as a "New Wave Picture." A 35mm print of the movie will screen on Halloween night at Liberty Hall, 642 Mass.

Many can point to "Carnival of Souls" as the project that jump-started this genre.

The 1962 horror film, written by John Clifford and directed by the late Herk Harvey, was shot predominantly in Lawrence (with a portion set in Utah). The tale centered on a church organist (Candace Hilligoss) who survived a car wreck, only to be increasingly hounded by ghoulish figures. Horror classics such as "Night of the Living Dead" borrowed liberally from the look of these mysterious tormentors, and modern efforts like "The Sixth Sense" and "The Others" owe much to the picture's twisty ending.

So it's only fitting that "Carnival of Souls" will enjoy a theatrical screening on Halloween at Liberty Hall, 642 Mass.

The 86-year-old Clifford will be the evening's special guest and is slated to speak about his unusual experiences shooting the indie production. Clifford (who has lived in Lawrence since 1952) took time to discuss the legacy of "Carnival of Souls" with the Journal-World.

What is the first horror movie you ever remember going to see?

It was either "King Kong" or "Frankenstein." In fact, I remember sitting with my brother at the "King Kong" movie at night in the balcony. There weren't many people there. Just as King Kong burst out, there was a lightning storm that struck outside. I'll never forget that."

Q: Do you still keep up with watching horror films?

A: I'm not a particular fan of horror flicks. I go to the kind of movies they have at Liberty Hall -- foreign films and things of that sort. I don't go for these gross horror films where the guy with the hatchet chops off the head of the half-naked teenage girl.

Q: When modern audiences view "Carnival of Souls," do certain scenes get a different response than they did when the film first came out?

A: Sometimes they get a better response. The first place we ever showed the film was here in Lawrence. I think the audience was a little confused by it (laughs). It was different -- it doesn't seem like it is now, but it was. But the kids liked it right off the bat. I remember some fellow told me his son had seen two great movies that year: "Ben Hur" and "Carnival of Souls."

Q: What do you remember about the process of writing "Carnival of Souls?"

A: Herk had told me he had seen this outdoor dance pavilion by the Great Salt Lake. He gave me carte blanche as long as we ended up there. I remember starting out and thought, "Well, he hasn't got much money, we can't do too much, and he didn't want too much dialogue." It's half silent film. Most people don't realize that because of the organ music. I thought, "What can we do to make it look good?" I began thinking of what we had around Lawrence that might give us an interesting set practically free. The first thing I thought of was Reuter Organ Company. I had been in there and had seen that giant room where they assemble the organs. Most people hadn't seen that. And that gave me the idea to make the protagonist a woman organist.

Q: Since Lawrence never had a movie filmed here before, how did the city react during the shoot?

A: I don't think they knew about it. It was just a couple locations. We didn't publicize it much. Herk shot in that boarding house on Sixth. It happened to be empty at the time. The first day's shooting was at night. I remember picking up Candace Hilligoss at the hotel and taking her over to the house and they shot all night. Most people didn't know it was going on while it was happening.

The race starting at 23rd and Iowa streets

Playing the organ at the Reuters factory

The house at 6th and Louisiana

Q: Do you have anything special planned for the Halloween screenings at Liberty Hall?

A: I'm hoping to run a three-minute video section of Herk himself introducing the film. It was something he had shot at KTWU. They want me to introduce something, so I'm going to talk a little bit and introduce that.

A: I thought it was awful (laughs). But we sold them the rights, and they can do what they want. ... They tried to redo "Carnival of Souls" and sex it up a little.

Q: Does "Carnival of Souls" deserve its reputation as an influential, low-budget masterpiece.

A: I don't know if it's a masterpiece. It has obvious flaws. It does seem to be a big inspiration to all these young independent filmmakers. I don't think a year goes by that I don't hear from one or two of them. The idea that we did this film independently, and it got rediscovered 27 years later and played houses all across the country, is fascinating. It's certainly a cult classic. That's not exactly a masterpiece is it?