Teens to perform in plays based on Ten Commandments

Just because the Ten Commandments are written in stone -- well, at the least the original version was -- doesn't mean you can't have fun with them.

It's a collection of 10 short plays written by 10 leading Theatre for Young Audiences playwrights, each play inspired by one of the Ten Commandments.

The plays are meant to be compelling, moving and funny -- but most of all, entertaining. Performed by a cast of Lawrence-area teenagers, they bring each of the commandments to life in a contemporary situation.

"The plays range from a light and comic treatment of issues to the very serious. They really have as wide a range as the playwrights that wrote them. They're quite involving, quite charming," said Ric Averill, the arts center's drama program director.

"It's an exploration of how old, spiritual principles and laws that we almost take for granted have an impact on our daily lives, regardless of our spiritual backgrounds. This is what you are taught at the beginning of your religious education."

Averill is one of four people who will each direct a number of the plays. 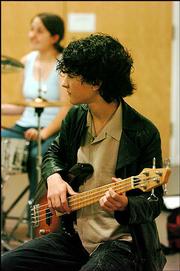 Tommy Cottin plays bass for background music while cast members of "10 X 10" go through their lines at Lawrence Arts Center. Cottin, a ninth-grader at Central Junior High School, will appear in three of the "10 X 10" plays.

Though the Ten Commandments are a serious subject -- they're viewed as the cornerstone of Judeo-Christian ethics and morality -- "10 X 10" isn't meant to come across to audiences as preachy.

"It's not just going to be a pedantic lesson. It will be a theatrical exploration of the commandments by these playwrights, and the kids do a very good job," Averill said.

"Like any theater experience, you want people to be moved by it. It shows how theater can illustrate some cool religious philosophy."

"10 X 10" is the brainchild of writer Jeff Gottesfeld. His wife, Cherie Bennett, is a friend and colleague of Averill's in the field of youth theater organizations.

Gottesfeld, who lives in Salt Lake City, is the creator and project coordinator of the collection of plays. He solicited people from among a group of award-winning playwrights who had participated in The Kennedy Center's "New Visions/New Voices Program," won an American Alliance for Theatre and Education Distinguished Play Award or been winners of the Bonderman Youth Theatre Playwrighting Symposium in Indianapolis.

"The idea came to me in 2002. In this post-9/11 era, we as a people, and teens in particular, are renewed and refocused on finding our moral center. The Ten Commandments are at the heart of our tradition," Gottesfeld said during a telephone interview this week.

"They provide a good jumping-off point for moral and ethical exploration. And so I said to myself, 'OK, Ten Commandments, 10 short plays. Let's see what we can put together.'"

Playwrights were randomly assigned one of the commandments. They were told to write a short play of no longer than 10 minutes, with a cast of two to four actors, featuring teenage characters and written for middle and high school audiences.

Other than those guidelines, they were given complete freedom.

"I thought what came back (to him) was really cool. This collection of plays is not a sermon. What you see here are 10 very strong playwrights at the peak of their creativity, using a particular commandment as an impetus for an entertaining work of art," said Gottesfeld.

The cast of "10 X 10" is made up of nine teenagers who are in the eighth to 12th grades and auditioned for their parts. Each of them appear in several of the short plays.

Brandie Mann, 14, is a freshman currently at the Douglas County Juvenile Detention Center. She has different roles in three of the plays.

"It's kind of a modern-day Ten Commandments -- a re-mix. They're the basic laws of life: what you're supposed to do and not supposed to do," Brandie said.

Tommy Cottin, 14, a ninth-grader at Central Junior High School, also appears in three of the plays.

"I don't think it's extremely religious. It's showing how the Ten Commandments could be portrayed in modern times. People will be able to see them in a different light," he said.

Lauren Bornstein, 17, a senior at Free State High School, is the oldest cast member. She explained what "10 X 10" means to her.

"Have faith in something, and follow the laws. I don't like to think of this as pushing religion on anybody. I think it's more trying to open people's minds," she said.