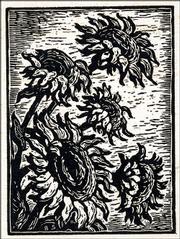 "Sunflowers," a print by Lindsborg artist Birger Sandzen (1871-1954), is part of "A Kansas Art Sampler" at the Spencer Museum of Art.

There's a small-minded but all-too-common school of thought that Kansas is merely a desolate pass-through between Colorado and Missouri.

The same theory holds that should a visitor actually have occasion to stop in the Sunflower State -- God forbid -- they would realize a virtual black hole had sucked up all art and culture and left only clucking chickens and farmers in its wake.

But a new exhibition at the Spencer Museum of Art handily dispels that myth by sampling 150 years worth of wonderfully diverse art created in reaction to the state -- often by natives, but also by outsiders.

"Life anywhere is not just a simple caricature or stereotype," says exhibition coordinator Kate Meyer, curatorial assistant in the department of prints and drawings. "There's always so much more to it than that."

The works in "A Kansas Art Sampler," which remains on view through Feb. 6 in the museum's White Gallery, address the rich agricultural history of the area and the ongoing tie that Kansans have to the land.

"A Kansas Art Sampler," exhibition of the state's art and culture Event is ongoing until Sunday, February 6 @ the Spencer Museum of Art's White Gallery

They also zero in on violent moments in the state's past: William Quantrill's bloody raid of Lawrence; Bonnie and Clyde's shoot-'em-up demise in a car they stole in Topeka; and the calculated murders of a western Kansas farm family made famous by Truman Capote's novel "In Cold Blood."

Issues of race, environment and land use also are reflected in the artwork, as are perceptions of the region.

A print by New Yorker William Basil Mock places an overall-clad gorilla with a pitchfork in his hand and a wheat stalk in his mouth among the familiar trappings of a Kansas farm to comment on the state's recent debate about de-emphasizing evolution in public schools.

The visual language Mock uses, whether it represents a pervasive reality or not, "translates the message that here we are in Kansas where the gorillas pitch hay and we're not teaching it necessarily," Meyer says. "It's hard to look at without kind of giggling, which is nice about something that was taken pretty gosh darn seriously at the time."

The exhibition is organized in conjunction with Art and Popular Culture of Kansas, a course being taught this fall by Kansas University professors Charles Eldredge and Chuck Berg.

"I always like teaching from the original works wherever possible," says Eldredge, a distinguished professor of art history. "The fine show that the museum did last summer on Lawrence as an art venue simply continues with more and varied works from a wider geographical region than just the city of Lawrence."

Indeed, the photographs, paintings, prints, sculptures and mixed media works in the show represent locales throughout the state -- from tiny Lucas, where Samuel Dinsmoor erected his fanciful, concrete vision of the Bible, to Junction City, where photographer Joseph Judd Pennell captured intimate glimpses of the city and its inhabitants during the late 19th and early 20th centuries.

"Joy on Kaw Valley Loam," a 1946 wood engraving by Russell-born artist E. Hubert Deines (1894-1967) is part of "A Kansas Art Sampler." The exhibition is on view through Feb. 6 in the Spencer Museum of Art's White Gallery.

"The diversity is the point," Eldredge says of the exhibition. "There's no single image that can summarize Kansas any more than it could summarize any other place. There's a complicated cultural mix. It's a rich history. It's one that I think students in Kansas ought to know something about."

That regional legacy arose when artists such as Robert Swain Gifford and Andrew Butler recorded their interpretations of the Kansas plains during their travels through the state to reach the frontier in the 19th century. It continued in the 1930s and '40s with groups such as the Prairie Print Makers, led by prolific Swedish transplant Birger Sandzen from his studio in Lindsborg. The printmaking society brought together artists from around the country dedicated to making artwork more accessible to the masses. The artists commissioned a new gift print each year that would be affordable for collectors.

"If there's a mover and shaker of the arts in Kansas, it's got be Sandzen, somebody that came in and influenced so many other artists as their peer and as their teacher," Meyer says. "Growing up here, what's always really impressed me about his art is how accessible it is, how you find it in the schools and in the libraries and in the museums and in people's homes. It really is a part of life here."

A series of prints depicting pastoral scenes, some created by members of the Prairie Print Makers, hangs in the show opposite a wall of work by contemporary artists grappling with environmental concerns. Among them is Lawrence artist Lisa Grossman's "86 Bends of the Kaw," a series of relief-roll woodcuts mounted on six vertical panels and culled from photographs she took during an east-to-west flight along the Kansas River.

She discovered, during airborne journeys that she later compared to a historic channel change map, that the river flows through a quite different path today than it did just a decade ago.

"Through my research and creative process, I developed a deeper appreciation for the role of the river as a vital source for all inhabitants of this prairie river corridor, past and present," Grossman says.

"I share with many of my Kansas artist predecessors a love for the landscape and the desire to make images that expresses that love of one's place," she continues. "I also share with many Midwestern artists since the '30s an interest in how we inhabit this place and our impact on the land, air and water."

City scenes occupy wall space in the exhibition as well.

"He's an artist who believed that art should be of its moment, which is what any modern artist thinks," Meyer says. "And the moment in Wichita is ... elevators; it's power lines. It's not wide-open spaces because we've been building here and farming here and supplying the world with stock and grain."

Near Dickinson's lithograph in the gallery is an Atchison view by John Falter that appeared on the cover of the Saturday Evening Post in 1951. In the colorful Rockwell-esque oil painting of Falter's parent's quaint Kansas neighborhood, a boy delivering newspapers on his bicycle has such atrocious aim that homeowners are forced to lean out second-story windows and venture onto their lawns in bathrobes to retrieve the daily news.

"What I think is so remarkable about this is that, although license has been taken to make this a little more comical, a little more idyllically all-American and cute, doesn't it look like driving up Louisiana?" says Meyer, a Kansas native.

Like Meyer, visitors to the exhibition are likely to find their own connections to the work.