With the uniforms, the instrumentation, the musical selections and even conductor Robert Foster appearing as the "March King" himself, a 150th birthday salute to John Philip Sousa will recreate the music, style and energy of a Sousa concert. 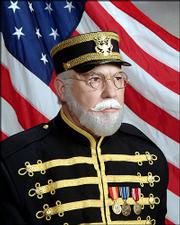 Robert Foster, who directed Kansas University bands for 31 years, will step into the role of John Philip Sousa for "A Star-Spangled Spectacular." Foster will conduct the concert, which celebrates the 150th birthday of the "March King," at 3 p.m. Nov. 7.

"A Star-Spangled Spectacular" will be performed at 3 p.m. Nov. 7 at the Lied Center.

The band is comprised of some of the Midwest's finest musicians, chosen by invitation only, from bands and orchestras across the region. The musical selections will be similar to those the Sousa Band would have performed during one of its three stops in Lawrence early in the last century.

Leisring, Kansas University assistant professor of trumpet, came to KU in 2003 after 14 seasons with the Tenerife Symphony Orchestra in the Canary Islands. There, Leisring performed with more than 100 world-class artists and made more than 30 recordings.

Bobo, one of America's top marimba artists, is an assistant professor of percussion at KU. He has performed across the country as a solo recitalist, clinician and orchestral percussionist.

John Philip Sousa and his band: A Star-Spangled Spectacular

Ohse, a soprano, is pursuing a bachelor's degree in vocal performance at KU. Her past performances include Mary Warren in "The Crucible" and Yum-Yum in "The Mikado" for the KU Opera.

Foster is a professor of music and assistant chair of the KU department of music and dance. For 31 years, he was the director of bands at KU. He is conductor and musical director of the Lawrence City Band and vice president of the John Philip Sousa Foundation.