Trail Blazers: Biking in Lawrence for whistlers and wobblers alike 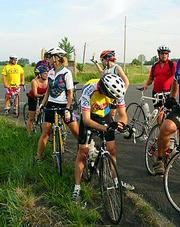 Sure, there may be a lot of cool bike clubs in Lawrence. But none of them are as cool as the Weekly Wandering Weary Wobblers.

The late 1800's secret society in Lawrence was united by a common goal:

"To promote good feeling among wheelmen; to encourage and facilitate touring and runs into the country; to protect its members from bicycle thieves and oppressive lawmaking; and to encourage the improvement of our highways."

Meetings were held in remote forest locations, where club officers like the "Most Weary Wobbler" and the "Profane Priest" presided over the often-inebriated proceedings.

"They'd have this initiation ceremony for the new members, and they had this goat out there," said James McKenzie, a Lawrence biker who authored an article on the Wobblers for the Lawrence Bicycle Club. "I have no idea what the significance of the goat was. I'd love to find out."

Unfortunately, the Wobblers went the way of the square wheel, leaving present-day Lawrence bike enthusiasts with one less option for promoting "good feeling among wheelmen."

Then again, one could point to the annual Summer Solstice Pub Ride -- which takes riders to ten bars in the course of one very "wobbly" night -- as one indication that Lawrence bicyclists may not have entirely regained their good sense.

"I just don't see much difference between those guys back then and the ones nowadays," McKenzie said with a chuckle.

Mountains in Kansas?
Though the traditions may have changed, bicycling in Lawrence still inspires the same rabid enthusiasm and outlandish customs that the Wobblers introduced nearly a century ago. The goat rituals may have fallen by the wayside, but the social aspects have endured.

Besides their weekly rides, their annual Lawrence Mountain Bike Club Shindig is Sept. 4 and open to the public. After a 25-mile bike ride, there will be food, drinks, live music, and general outdoor fun at Clinton Lake.

"It's a lot more fun to ride with a group," says Kimberly Kissing, a KU student who rides weekly with the Lawrence Bicycle Club. "It takes your mind off the pain of the ride and makes it so much more enjoyable, and afterwards you get to eat."

Lawrence's two foremost bicycle organizations -- the Lawrence Bicycle Club and the Lawrence Mountain Bicycle Club -- both enjoy the benefits of riding in a community deemed "bicycle friendly" by the League of American Bicyclists. For the LBC, that means miles upon miles of lazy country highways, while the LMBC enjoys nearly 40 miles of mountain trail along the Kansas River and at Clinton Lake.

"I think we probably have the best trail systems in Kansas," says Greg Schroeder, a former president of the LMBC. "The river trail is really good because somebody who wants to make it challenging can push themselves and go faster, but somebody who's a real novice can also show up and not feel intimidated."

Members of the LMBC help maintain the nine-mile river trail by lopping off overhanging foliage, mowing both sides and building diversions around problem areas. Heavy summer rainfall has made their job more difficult, as weeds sprout up like gangbusters and hard dirt turns to mud.

"We encourage people not to ride when it's muddy," said LMBC president Gerard Arantowicz, explaining that riding on a wet trail can cause irreparable ruts. "Understand that it's maintained by volunteers and it doesn't get that way naturally." 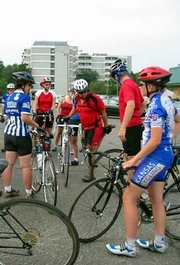 While the LMBC frequently holds group races along the trail, it is open to anyone with a bike and some go-getter gusto. Arantowicz recommended starting off with a cheap bike with some form of suspension, though letting some air out of your tires can replicate the effect of shocks, he said.

"Ride that bike into the ground, then give yourself a really nice bike once you know you're hooked," he said. "And have fun out there. It's a blast."

On the road
For the more road-oriented cyclist, the LBC offers free group rides five days a week. There are rides for all skill levels, with routes averaging between 15 and 30 miles.

"There's none of the cliquishness you might experience at other clubs," said Bland, 32, who works as a nurse for the University of Kansas Medical Center. "There's easily two or three new riders every week."

The club's routes start at parks and restaurants in town and snake out into the surrounding county highways. Group members quickly adapt to the rules of etiquette, such as pointing to road obstacles and shouting "car back" when vehicles approach.

"Cars tend to respect you and be a little more careful around you when you're in a group," Breedan said. "Plus, if you have some kind of mechanical problem there's always someone there to stop and help you fix it or go get help."

"Overall, I think the Lawrence riders are a lot faster than anywhere else in the state," Breedan said. "But we don't mind stopping and waiting for slower riders."

Shopping spree
Today more than ever there are limitless options for the upstart biker. From mountain bikes to road bikes to hybrids and everything in-between, consumers have the benefit of a niche-oriented market that caters equally to casual hobbyists and hardcore hammerers.

"Anything that you can think of that you want to do on a bike, they make a bike for," said Dan Hughes, owner of Sunflower Outdoor and Bike Shop, 802 Mass. "I think it's good for the consumer ... It makes our job a little tougher because we have to ask a lot of questions to say, 'Ok, really, what are you going to do with this?'"

"If you're going to have one bike, then it's got to be a mountain bike," said Hughes, an avid rider who owns 17 bikes. "If you had multiple bikes, you'd have a mountain bike for riding the river trails, a commuter bike to ride to campus, and a road bike to go for that 70-mile road ride."

Another style of bike that has become popular in recent years is the comfort bike, which plays the more everyday-friendly cousin to the mountain bike.

"In the height of the mountain bike boom everybody was buying a mountain bike because it was the coolest thing to have," Hughes said. "We would have customers come back and say, 'Number one, my ass hurts. And number two, I want the handlebars higher' ... Eventually the bike industry said, 'Duh, why don't we just make a bike like that.'"

Hughes said the bare minimum safety kit for riding the local trails would include a patch kit, pump, spare tube and tire lever, and perhaps a multi-tool kit to fix a broken chain.

While all of the above precautions should also apply to road-riding excursions, there's one more very important factor to take into account before hitting the county roads, Hughes said.

"Kansas is not known for its mountains ... but we do have wind," he said. "There's nothing worse than flying out of town with a tailwind and feeling great for 40 miles and then all of a sudden not feeling so great and realizing that you have to ride 40 miles back."