Jacob Slichter enjoyed a unique vantage point while peering out from behind his drum kit.

He watched as his trio Semisonic went from a fledgling Midwest bar band to a Platinum-selling, Grammy-nominated act whose signature hit "Closing Time" reached No. 1 on the U.S. charts.

Then Slichter witnessed the group's celebrity crumble under a mountain of industry expectations and runaway debt.

Rather than wallow in his fleeting fame, Slichter decided to put his experiences to work. Last month the musician released his publishing debut based on the ordeal: "So You Wanna Be a Rock & Roll Star: How I Machine-Gunned My Way Through a Room Full of Record Executives and Other True Tales From a Drummer's Life."

This isn't a sex and drugs expose of excess, a la Led Zeppelin's "Hammer of the Gods" or Mtley CrÃ¼e's "The Dirt." Instead, it is an insider's tale about the harsh and hilarious realities of surviving within the soul-sucking, ego-inflating music industry.

"When the book came out, I was expecting to hear from Semisonic fans," Slichter says. 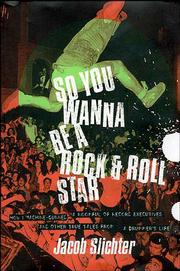 "But amazingly who I heard from first is people in bands -- just any old band who may never have heard of Semisonic."

Slichter views "Rock & Roll Star" as a cautionary tale about a lifestyle in which creativity and commerce share an uneasy partnership. He hopes that others can learn from Semisonic's episodes.

"If I'd had this book to read for instance, I think I would have had a clearer picture about a few important parts of the music business," Slichter says from his home in Brooklyn, N.Y. "Although the book would never have persuaded me -- and it wasn't my intention to persuade anyone -- NOT to pursue music. It was great and I really had a great time over the past 10 years."

Slichter first began dabbling with writing about this subject when his weekly journal entries became a popular feature on the band's Web site (www.semisonic.com) in the late '90s.

"The road diaries came about because I'm not as good or prolific a songwriter as Dan," he says. "It wasn't too long after posting the first couple of road diaries that it occurred to me that I should make this into a book."

The Harvard graduate originally planned for it to be a personalized memoir until a publisher told him the harsh truth that "a lot of people don't really care about the collected road diaries of Jake Slichter." Then he realized he could paint a broader picture of the corporate music world as a whole, from unmasking how radio payola is legalized to chronicling the absurdities involved in a video shoot.

The drummer relied on his already published journals, various notes and tour itineraries to vividly recreate events on the page. And he had plenty of help from his bandmates.

"A lot of things that happened, the band would talk about for a long time afterward," he says. "There's that whole thing in there with (fickle festival promoter) Super Frank -- you wouldn't forget that. Or the program director in Wichita telling us that we were kind of cerebral (after) we had been talking about hockey the whole time."

Slichter says the other members of his trio were happy with the results, although they admitted it was jarring to see themselves portrayed as characters in print.

"I think Jake's book really captured the inner workings of the music industry, especially all the things that are so different from what you imagine when you're a teenager," frontman Wilson says. "The book also captured the inner workings of Jake's brain, which in itself is an impressive feat. He's the funniest person I've ever met, and the book actually sounds like Jake talking."

Now that Slichter has launched this creative endeavor, it puts him in the rare position to contrast the music industry and the publishing world. 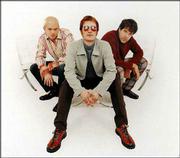 "I think book companies, like record companies, have a limited amount of focus they can put on any one thing," the 43-year-old says.

"Yet there are major differences. You don't have to pay the bookstores $1,500 a piece to carry your book. There's just a whole lot less money involved ... I have to make up my advance, but there's no black hole of expenses that eat up everything."

One of the surprising revelations in "Rock & Roll Star" is how the expenditures MCA Records incurred on the band's behalf (known as "recoupable debt") was perpetually more than what got brought in, despite the fact that Semisonic had a Platinum-selling album.

"We never got our share of the record sales because our points never eclipsed our debt," says Slichter, who does get a cut of the publishing royalties. "So it's not debt like a college loan. It's more like they consider all the expenditures a form of an advance on your points."

So how many additional records did Semisonic need to sell in order to see a profit?

Even though Semisonic was based in the Twin Cities, the book makes frequent references to Lawrence and Kansas City.

"(KC) was the first place outside of Minneapolis where we had a really intense reaction to the crowd right from the very beginning," he recalls. "That was probably important in convincing us we were a good live band. Because at the beginning of the band we thought we would just try and be the Steely Dan of the '90s and not tour and just make records.

"But that show at The Hurricane in the fall of '93, that was one of the first times we had played out of town. And in fact a lot of people in the audience had already heard our tape. We had a little four-song tape out. We would start songs and people would whoop it up. They knew the name of the songs before we even played in the city one time."

Aside from the frat boy contingent that would drunkenly demand requests to hear songs from Wilson and Munson's former band (Trip Shakespeare) at Semisonic shows, Slichter also has fond memories of Lawrence.

"The fans in Lawrence are just especially loud," he says. "They're raised on a steady diet of corn, beef and Jayhawks basketball. They have the lungs and the will to use them."

Currently, Slichter is enjoying newfound fame as an author. In addition to his book tour duties he recently wrote an op-ed piece for The New York Times about summer concerts. ("I feel like my writing voice on the page is a little more self-assured than my voice as a songwriter," he offers.)

He also is busy crafting the string arrangements for Wilson's impending solo album, which he says, "sounds like it could be better than any of the Semisonic records."

As for a reunion of his renowned band, Slichter says there is always a possibility -- although it would be unlikely to involve a major label.

"I don't think it would be a matter of the deal, it would be more, 'Is there a pile of songs that sound like a Semisonic record?'" he explains. "Do we feel like we have something to say? As far as the music business, it feels like it's in so much turmoil these days. But I think it would be nice to have a record deal where selling a million records wouldn't be viewed as a disappointment."