David Nieto comes to his garage studio late in the evening -- after dinner, homework and a full day of school -- to meditate with mallets, hammers and chisels.

Chips of Kansas limestone fly as he hones the bear sculpture he's been working on for more than a year. The clank of metal on metal rings out as he stamps his initials into a strip of raw brass that will become a cuff bracelet. 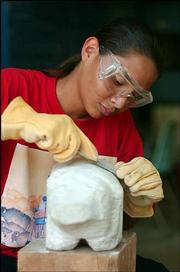 David Nieto, 14, chisels a bear out of limestone in his Lawrence garage. Nieto, who worked on Wednesday, will sell limestone busts and jewelry next weekend at the Haskell Indian Arts Market. A "White Buffalo" limestone sculpture he entered in the 2001 Lawrence Indian Arts Show is featured on posters and T-shirts for this year's exhibition.

At 14, David seems seasoned beyond his years, often talking about his art as if it's an extension of him.

"The stone tells you what to do," he says. "You kind of have a drive for it."

David also has a knack for crafting it well, judging by his laundry list of awards. He started entering the Lawrence Indian Arts Show at age 9, and has taken part in the juried exhibition every year but one since. He won Best of Show in the 12-and-under category in the youth competition as a seventh-grader in 2002. And this year, organizer Maria Martin chose to showcase one of David's sculptures, along with art by two other youngsters, on the show's T-shirts and posters.

"There are some really talented young artists that need encouragement," Martin said. "I think it's just kind of exciting to celebrate young upcoming artists."

The 16th annual Lawrence Indian Arts Show kicks off with a benefit opening at 7 p.m. Friday at the Lawrence Arts Center, where the exhibition will remain on view through Oct. 9. More than 170 artists, including David, will sell their wares at the Haskell Indian Art Market on Saturday and Sept. 12 at Haskell Indian Nations University.

For David, a Santa Domingo Pueblo Indian, making jewelry and sculpture isn't just about racking up awards, although he regularly places at Oklahoma's Red Earth Art Competition, one of the largest American-Indian art shows in the country.

It's also about carrying on a proud family tradition. David learned sculpting and metalsmithing from his father, Don Nieto, with whom he shares a studio. Don, in turn, learned the crafts from his mother. She still lives at the pueblo in New Mexico and sells her jewelry in Santa Fe.

"I got started by her making us do this stuff," Don says of his mother.

"It was an essential part of our lives. My sister and I used to cry because we had to do it," he recalls, laughing.

Of course, things were different then. Don used a hand-pumped drill to bore pin-sized holes in tiny bits of shell. It took hundreds to form one string of beads for a necklace.

David's work is not so tedious, but the younger Nieto still insists on working by hand. Even so, he showed on a recent evening that he can crank out a bracelet in about an hour (maybe quicker without distractions).

He first cuts a length of brass, then uses metal punches and a ball-peen hammer to stamp his maker's mark into the malleable metal. With an ink pad and decorative stamps, he works out his design on paper, using a pencil-traced version of the bracelet.

Next, David files the sharp ends of the bracelet.

Maria Martin, organizer of the 16th annual Lawrence Indian Arts Show, displays a Hopi wood carving by Delbridge Honanie. In the foreground are three pottery pieces by Phyllis Tosa of Jemez Pueblo, a wool rug by Lola S. Cody and a sterling silver cream and sugar set by Linda Lou Metoxen. These and other American-Indian pieces will be on display Friday through Oct. 9 at the Lawrence Arts Center.

"I do this until it's nice and smooth," he says, running his fingers over the surface.

After carefully stamping a pattern into the metal, David polishes the bracelet, then gently shapes it around a form using a rawhide mallet.

A little more polishing, and it's a finished cuff.

He did this same demonstration last year for his communications class at school.

"Some kids thought I brought gold to school," he says. "The teacher was impressed."

Martin chose David's "White Buffalo" sculpture for the posters and T-shirts. She said she had been impressed with David's artistic development.

"He's really an incredibly talented young man who just seems like nothing really is that much of a challenge," she says. "He says, 'I'll try that, and next thing you know he's presenting something."

"White Buffalo" placed first in the 2001 youth division at Red Earth and captured a youth award in the Lawrence Indian Arts Show.

The buffalo, which has an inset turquoise stone for an eye and a piece of black jet stone for a horn, now occupies a prime space on the Nieto family mantle.

The animal represents the survival of David's people, who used it for housing, clothing, food and tools. He began working on the piece, which took nearly two years to complete, at the 2000 Kansas Sculpture Assn. Symposium.

Professional sculptors at the symposium commented to David as they saw the beast emerging: "We look forward to seeing your name in Sculpture magazine some day."

David hopes so, too, although he doesn't plan to study art in college. He intends to go to Haskell and get a degree in business or marketing. He has dreams of opening a casino at his family's pueblo.

But he'll always make art, he says. It's his therapy.

"There's no deadlines. Nobody's breathing down your neck," he says. "If you've had a bad day, you pound the metal."