I was 14. I lived a few blocks from a 7 Eleven that had this arcade game I had before only heard through legend. It was the one on one fighting game that first captured the world's mind, and kept many arcades full. That game was Street Fighter II and since the incarnation of the side-scrolling fighter, no arcade video game has drawn crowds like it did. 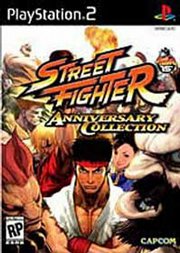 After some time passed, certain modifications started showing up in the form of speed boosts for the entire game. There was Street Fighter II: Turbo, Champion Edition, Super Turbo and also some independent and illegal modifications. The PS2 now gets the Anniversary Collection which includes Hyper Street Fighter II and the lesser known but pretty amazing Street Fighter III: Third Strike.

Hyper SF2 actually includes all versions of characters from each type of SF2. For instance, you can be Ken from the original Street Fighter II and play Ryu from Street Fighter II: Super Turbo. This makes for 60 or so fighters to choose from in a sometimes awkward collection of arenas. Oddly enough, the CPU can only play as an opponent form the most recent version, which sort of detracts from the novelty.

Street Fighter III sucked eggs. It was one of the sorriest excuses for a sequel and was incredibly imbalanced. Although most of Street Fighter's fans had given up after the abysmal let-down, Street Fighter III saw two more incarnations, the second being the included Third Strike. Third Strike capitalizes on the superior gameplay of its side-scrolling predecessor and adds perfectly crafted parrying, leaping and super attack elements for an unprecedented amount of 2D depth.

Playing both of these titles reminds me why I continue to play video games. Street Fighter II and III are pictures of innovation, genius for its time. It was all about gameplay and there are still developers out there today that strive for the same innovation, keeping a guy like me riveted to see what's next.

Being a port of the actual games, the graphics haven't been spruced up. However, the games actually look slightly worse than their arcade counterparts. The PS2 does a pretty crappy job of pulling off line-doubling so Capcom gives you a "blur" option if you don't like the jaggies. That screams laziness.

Sadly, PS2 owners get no online mode. This seems to be the most logical step for an Anniversary edition of this caliber, but there is no such luck.

Still, both games are still an absolute blast to play. There are some puzzling omissions that could've made this a truly killer package. But for $30, you really owe it to yourself to indulge in the past.