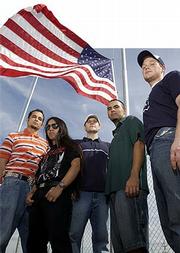 Pomeroy members (from left) Dean Hopkins, Tyson Leslie, David Fairbanks, Matt Marron and Chris Davis will travel to the Middle East to play for US soldiers deployed in the region.

The Armed Forces have a new go-to entertainer that has nothing to do with golden age Hollywood routines, tight skirts or cheesedick country music.

"For five musician types like us this is our one opportunity to feel like we're serving our country," said singer/percussionist David Fairbanks, who will join his Lawrence-area band Pomeroy on a two-week tour of Middle East military bases. "None of us would have ever gone into the service ... so it's kind of exciting for us to actually feel like we're over there, a part of the big military machine."

After six years of touring stateside, Pomeroy will hop on a plane Sept. 19 and head off to play a string of dates in six countries that are as foreign to our culture as our tongue: Kyrgyzstan, Uzbekistan, Afghanistan, Pakistan, Qatar and the United Arab Emirates. The tour, organized by Armed Forces Entertainment, will bring the band to U.S. military bases and let them unleash their trademark hip-hop-flavored funk grooves.

According to guitarist/vocalist Matt Marron, it's a small favor to ask of the band.

"They're over there doing a job so we can tote around in a 15-passenger van and do our job," Marron said.

Into the fire
Pomeroy's desert adventure came as a result of hooking up with Chicago's Fresh Tracks Management, which has also sent country-rock band Hello Dave and '80s hair metal cover band Monsters of Mock on military base tours.

Initially enticed by the prospect of playing tourist-friendly destinations like Spain, Egypt and Italy, the band was surprised to find out they would be heading to the Middle East.

"I was like, 'Wow, those places would be awesome, I hope we don't go to the Middle East,'" said drummer Chris Davis. "Sure enough we get the phone call and they're like, 'You guys are going to the Middle East!'"

The band agreed to the gig immediately despite some reservations from family members and friends.

"Everybody around us is kind of freaking out, they're like, 'Don't go, we're scared for you,'" Fairchild said. "Our mothers are just beside themselves."

According to Captain Josh Anderson of Armed Forces Entertainment, however, the band will be extremely safe even in high-threat areas like Afghanistan.

"For the most part they're flying into military air bases, which are very secure," Anderson said. "The names themselves seem to evoke more fear than anything because people aren't familiar with these places."

The band will travel largely via military jets but will be required to make a couple commercial flights during the end of the trip - a scenario that has the band members a little on edge.

"The discussions we've had are like, 'OK, if we're in a commercial airport in Qatar and it looks like somebody's going to get taken, what are we going to do?'" Fairchild said. "Most likely nothing like that will happen, but you find yourself thinking about things you would normally not ever even consider."

Operation Desert Funk
Pomeroy will need to be an entirely self-sufficient operation for the length of the two-week tour, though generators and converters will be provided. To adapt, the band will forego amps in favor of a stripped-down arrangement where everything plugs straight into a PA system.

The band will be without keyboardist Tyson Leslie, whose wife is expecting a baby any day. In lieu of Leslie's nimble fingers, the band will pre-record his parts and play along with a click track.

"Pomeroy isn't exactly Pomeroy anymore without the keys," Fairchild said. "We're actually thinking of making a cardboard cutout of him and taking his keyboards over."

Armed Forces Entertainment has also requested that Pomeroy play as many covers as possible, which the band will oblige with odes to A Tribe Called Quest, Jamiroquai, Stevie Wonder, The Charlie Daniels Band and The Grateful Dead.

"That's kind of what the people want to hear," Fairchild said. "They're a million miles away from home, they're in a really crappy place doing some crappy stuff - they want to hear stuff they recognize."

Each member of the band - plus a road manager, sound engineer and tech engineer - will receive $150 a day to cover expenses. Since the majority of the food and hospitality will be provided by the bases, the band members may actually come home with some money in their pockets.

According to Marron, however, the trip is more about supporting the soldiers than making a buck.

"Even if I was vehemently opposed to what's going on over there, I would still go," he said, adding that he supported removing Saddam Hussein from power. "I think there's a lot of people who really like to be opposed to the war and I'm not really sure that they're as informed as they need to be."

"Just because you go and see freakin' 'Fahrenheit 9/11' doesn't mean you should be totally anti-Bush, anti-war."

Dollar doggs
As if the culture shock of returning home won't be enough, Pomeroy will join up with a four-day "Rockboat" cruise from Miami through the Cayman Islands upon returning.

The cruise - which also features Sister Hazel, Tonic and scores of other bands - should offer a welcome vacation before the band returns to the rigmarole of touring and working on new material.

As full-time musicians, Pomeroy must maintain a steady schedule of touring to pay the bills. Without support from a record label, the band - which now calls Kansas City home after stints in Manhattan, Lawrence and Omaha - relies on its booking agent and manager to keep them on the road.

"When we lived in Lawrence we would walk down the street every Tuesday or Wednesday and get like 6 dollar-whoppers and keep 'em in the microwave and just heat 'em up," Davis said. "We lived those years; we learned how to make it work."

Pomeroy is currently touring in support of "Identity," its third album. More so than the band's previous efforts, "Identity" focuses on pop-tinged melodies with three-part harmonies, while still sporting the Beastie Boys-esque hip-hop rhymes and bouncing grooves that the band is known for.

"Identity" may also be the album most likely to shake the 311 comparisons that have followed the band since its early days in Manhattan. 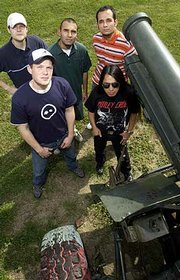 "I understand the comparisons ... we do groove music and we rap and we're from the Midwest and we have a white guy and a Mexican guy," Marron said. "But if you really come and see us play and listen to what we're doing, we're more on the hip-hop and funk side of things."

While Fairchild cites A Tribe Called Quest and KRS-One as primary influences, Marron was raised on a steady diet of Iron Maiden, Megadeth and Slayer. Add to that bassist Dean Hopkins' love for Tower of Power and Jamiroquai and you've got a group that pulls from a plethora of styles.

"I think the one thing that's universal with our band as far as what we like is every band we listen to has pretty good musicianship," Marron said. "We want people to walk away from our show and go, 'Wow, those guys know how to play.'"

Hopefully Kyrgyzstan will say the same.