Las Vegas — Roy Horn has never spoken publicly about the incident in which a 380-pound white tiger named Montecore nearly mauled him to death.

So when NBC airs the special "Siegfried & Roy: The Miracle" at 8 p.m. Sept. 15, viewers will hear Horn for the first time and see his battle to regain his motor skills after the tiger attack -- and subsequent debilitating stroke -- left him in a wheelchair. 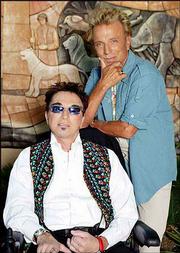 Illusionists Roy Horn, left, and Siegfried Fischbacher pose in this recent promotional photo taken in Las Vegas. When NBC airs its special, "Siegfried & Roy: The Miracle," on the duo, viewers for the first time will see Horn, the casualty of a near-fatal tiger bite and subsequent stroke. The show will air at 8 p.m. Sept. 15 on Sunflower Broadband Channels 8 and 14.

"That's been the remarkable part of this thing," said Jason Raff, the show's executive producer and director. "He really let us in to see the good days and bad days. I believe they gave us an unprecedented look."

In his own words, Raff said, Horn will attempt to answer what happened that terrifying night during a live performance at The Mirage hotel-casino on the Las Vegas Strip. He'll be interviewed by Maria Shriver in one of her first TV assignments since becoming California's first lady.

Raff told The Associated Press he's not going to reveal what Horn had to say.

"That I'm going to save for the special," Raff said. "That's his thing. He wants to say it himself."

As Shriver noted in an interview with the AP, "No one is 100 percent sure what happened that night."

The special -- produced by the network's entertainment division -- includes interviews with some of the 1,500 audience members and show staff who witnessed the horrifying Oct. 3 attack, as well as the paramedics who treated Horn in those first crucial minutes.

The tiger bit Horn in the neck and dragged him off stage. One of the show's employees was able to beat the animal off Horn by hitting it with a fire extinguisher. Horn is said to have lost a tremendous amount of blood.

While Horn staved off death in those first 72 hours, Raff said partner Siegfried Fischbacher had to make "some very quick decisions, life-saving decisions" about whether doctors should perform those potentially dangerous operations.

Shriver said Horn was doing remarkably better, but it's not clear whether he'll ever perform again.