New York — With a new round of "The Apprentice" ready to go, Donald Trump is fired. Fired up, that is. Maybe even more fired up than usual.

His show -- back for a second season at 7:30 p.m. Thursday on NBC -- is even better than before, crows the billionaire businessman, who can afford to brag, especially since the first time around he saved NBC's bacon and made "You're fired!" a bankable catchphrase. 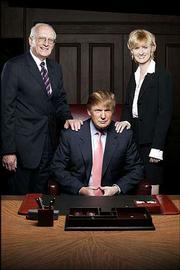 Entrepreneur Donald Trump, center, is flanked by his associates George Ross and Carolyn Kepcher in this promotional photo for NBC's "The Apprentice." This will be the show's second season.

But though never one to shrink from the spotlight, Trump signed on for "The Apprentice" just to have a good time, he insists. The first edition's finale in April -- when he hired Bill Rancic to oversee a Chicago construction project -- drew more than 28 million people. "You can have a really good time when that happens," Trump told The Associated Press last week.

Mark Burnett, who created "Survivor" for CBS and then made lightning strike again with "The Apprentice," is fired up, too. He calls the initial three episodes of the 17-episode series, which was taped this summer, "the best work of my career."

Why so? "The 18 new players trying to get the job as 'The Apprentice' watched the first season," he explained, "and they came out with a vengeance, and did better, and thought differently, which made it very exciting."

Each vying for Trump's $250,000-a-year "dream job of a lifetime," the 18 candidates were chosen from 1 million applicants, said Trump, which, if strictly accurate, would mean one-third of 1 percent of everybody in the United States took a shot -- or every attractive person slightly too old to audition for "American Idol."

Among them: Raj, a real estate developer from Philadelphia who affects a dandyish sartorial style likened by a rival to Rodney Dangerfield's in "Caddyshack," and Pamela, a San Francisco-based investment firm partner, whose searing look invites comparison to Cruella de Vil's.

With its return, "The Apprentice" reminds us that big business was never like this until Trump -- at least in his own telling.

"There's never been a situation like this," he declared, "ever, in the history of show business."