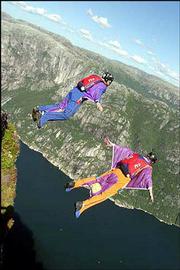 Tony Dicola, left, jumps off a Norwegian cliff in his film "Cinclus Vision."

The state of Kansas is not exactly known for its mountains. And no, Mount Oread, doesn't count. But at least for this weekend, Lawrence audiences will be exposed to images of towering peaks and precipitous cliffs.

"I'm always surprised by the number of people who come out who have a great love of the mountains," says Dan Hughes, Banff Mountain Film Festival organizer.

"Kansas gets short shrift on a lot of things, because we're supposedly flat here and we're all cornfed rubes, so to speak. But it's also only eight hours to the front range of Colorado where there's awesome climbing. And it's only four hours to awesome rock climbing in the Sam's Throne area (in Arkansas) or kayaking on rivers down in the Ozarks. I like to think of it as we're just equidistant to all the good stuff."

For the third year in a row, Canada's Banff Centre has selected Lawrence as one of the locations for its traveling festival. Fourteen pictures will be screened today and Saturday at Liberty Hall, 642 Mass.

"At the Banff Film Festival office they have this giant map of North America," Hughes describes. "They have a little red pin where all the showings are going to be. Out in the middle of nowhere there's one pin and it's on Lawrence, Kan., and there's nothing else around it for miles and miles."

This regional gathering is a spin-off from the international Banff event, which has been going strong since 1976. On average, 300 movies are submitted to the festival to be judged. Then it selects about 30 to go on a world tour. Hughes, co-owner of Sunflower Outdoor & Bike Shop, 802 Mass., got to handpick from that group the pics he wanted to import to Lawrence.

Hughes says the 2004 program is stressing a diverse mix of material, from mountain biking in British Columbia to skiing in Utah.

"There are some action films, which seem to resonate with the younger crowd," Hughes says. "'Wehyakin' is a really extreme kayaking film where people are doing some pretty hellacious, 60-foot waterfall drops.

"Then there are also some films that are going to hit home with an older audience. There's 'The Other Final,' which was the grand prize winner at the festival. It's about soccer in the mountainous regions of Montserrat. It's low on the adrenaline factor but very high on the cultural side of things."

This year's fest will also feature an area addition. Overland Park filmmaker Tony DiCola is screening "Cinclus Vision," his short piece about BASE jumpers (an acronym for Building, Antenna, Span or Earth).

"It captures an adventure that 10 Americans and one Canadian went to last summer in Norway," DiCola explains. "We're trying to take these birdman suits -- made of parachute between your legs and arms that basically makes you like a flying squirrel -- and jumping off 3,000-foot cliffs."

The title of the movie refers to the national bird of Norway.

"They're little swallow-like birds, but they're constantly diving straight down into the ocean, pulling up and coming back up," he says. "Cinclus vision means how we're getting the same perspective as these birds as they're flying up and down the face of the mountains."

DiCola says a normal free fall from these stratospheric walls along the fjords of central Norway will last from 12-15 seconds. But with the birdman suits on, it can approach a minute and 15 seconds.

He got hooked on skydiving after joining an airborne outfit in the military 15 years ago. He then did recreational sport parachuting for about 10 years before becoming involved with BASE jumping.

"Surprisingly enough, there are about 12 of us BASE jumpers in Kansas City," he says. "As silly as this may sound, sky diving actually gets a little boring at a point. BASE jumping revitalizes that."

Hughes recalls, "Tony comes in with his camcorder and says, 'Look at this footage I shot in Norway.' We all said, 'This film should be in the Banff festival. It's really cool.' So he submits it, and it becomes part of their group of films. A year later it's full circle, and it's being shown in Lawrence."