Mentalist reveals tricks of the trade 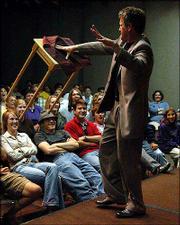 Chris Hanewinckel/Special to the Journal-World

Craig Karges describes his skills as part magic, part psychology and part intuition. Here he displays his levitating prowess to a college audience.

He should know because he claims to have invented the word.

"It's kind of hard to describe what I do," says Karges. "I'm part magician, part psychic, part entertainer. It's such a weird mixture of talents and techniques to put on the show that we decided to come up with a word that no one could spell or pronounce or understand, apparently."

Although the media has displayed difficulty grasping the term, the public has never shown any problem responding to what this extraordinist does. Karges has performed nearly 4,000 shows during his career, and in that span he has developed a reputation as one of the premier touring mentalists/magicians in the country.

In fact, he'll put money on it.

"I end every show by risking my check," he says. "Someone from student activities will bring the check up on Saturday. It gets placed in one of three envelopes. Then we get a random person from the audience and they mix the envelopes up and shred two of their choice. I'm totally hands-off. The idea is I control and manipulate them to keep my check intact."

Karges says he's lost his payment four times through the years, confirming that his intuitive skills are not always foolproof. One area in which he has never had to cash out, however, is when offering $100,000 to anyone who can provide evidence that he's stacking the audience in advance.

"It's not to debunk my methods," he says of the proposal. "It's that I don't set up or prearrange things with anybody in the audience. That's an important distinction.

"I freely admit some of what I do is magic. So if someone can figure out a magic trick, I'm not going to give them $100,000. But so much of what I do is talking to total strangers and telling them things about themselves, or asking people questions and predicting what they're going to say. So much of that is easily explained by saying, 'These are just friends of his' or 'He talked to them ahead of time and set things up.'"

A native of West Virginia, Karges first started dabbling in magic when he was 12. He further honed his craft while attending Marshall University. Despite being a broadcast journalism major, he soon found the illusory world of live magic provided him a more grounded career.

"I've never had a job," the 46-year-old recalls. "This is all I've ever done. I paid my way through college by performing. When I got out of school I just started touring."

In addition to high-profile appearances on "The Tonight Show with Jay Leno" and "Larry King Live," Karges does the bulk of his work at colleges, casinos and corporate events. He's the first to admit the campus visits are what he prefers.

"Students are always energetic and enthusiastic," he says.

Those attending his 8 p.m. show Saturday at Kansas University's Woodruff Auditorium will experience a routine best summarized by comedian Dennis Miller, who declared, "This weirds me out" after seeing Karges perform.

Chris Hanewinckel/Special to the Journal-World

Chris Hanewinckel/Special to the Journal-World Craig Karges will showcase his intuitive skills Saturday at the Kansas Union.

"It's all audience interactions," Karges describes. "We'll use maybe 40 people during the course of the show, either on stage or in the audience.

"It's divided into two parts. Part of it is mental in nature. Like I'll have the entire audience concentrating on things. And I'll start picking up initials or pet's names. It's different every show ... We'll have everything from a complex mathematical formula that someone is thinking about to a woman in the audience thinking that ponies are pretty."

The entertainer asserts the second half of the show is a bit stranger, relying more on physical demonstrations. He's been known to levitate tables or borrow audience members' wedding rings and link the bands together.

"I've had people that are levitating the table with me scream and run off the stage," he says.

Although such reactions are infrequent, Karges says he often does have to deal with misunderstandings regarding what his act is really about.

"Sometimes people come in with an attitude like, 'This guy is trying to pull something over on me,"' he says of folks who believe a con is involved.

"I don't ask anyone to believe in anything I do. It's one part illusion, so it's one part magic tricks. It's one part psychology -- just knowing people well and knowing how they're going to respond -- and it's one part true intuition. But it's all those three things wrapped together. I don't tell fortunes, and I don't talk to dead people."