New York — With a serene collection of sand-colored skirts and dresses, Vera Wang provided a Zen moment at New York Fashion Week while mixing casual and fancy looks, a popular trend for spring 2005.

Designers also are using shades of blue to add a little spark to a generally soft and neutral palette. The best illustration of this trend during Wang's runway show Friday at the Bryant Park tents: a strapless ballgown in a muted brown and rose modern-art print with a single line of bright ocean-blue tulle just below the bustline.

Fashion Designer Alice Roi embraces Marc Beckman after Beckman proposed to her with the help of some sign-carrying models during the runway show of her spring 2005 collection in New York.

There also were flashes of metallics, leaf-pattern prints and rich brocades, all of which have proved popular in the opening days of the eight-day event. Fashion Week continues through Wednesday with Diane von Furstenberg, Oscar de la Renta, Michael Kors and Ralph Lauren among the dozens of designers remaining on the schedule.

Wang described her collection as "a deliberate study in contrasting shapes, textures, weights and proportions, all carefully juxtaposed with diverse yet distinct cultural references." The designer said she borrowed from traditional Japanese dress, including obi waistbands.

Holly Hunter, a friend and fan of Wang's for several years, was in the front row for her show.

Hunter wore a sleek black illusion gown by Wang when she won her best-actress Oscar for "The Piano," and wore another of Wang's designs at this year's Academy Awards show. (She was a nominee for best supporting actress for "Thirteen.")

Wang has an awareness of a woman's body that translates beautifully into clothes, the actress said. 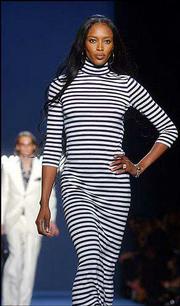 "I wouldn't describe Vera as a minimalist anymore, now her designs are more complex but not overwhelming. She does amazing things with fabric alone," Hunter told The Associated Press.

Up-and-coming designer Alice Roi offered a collection that might appeal to the younger sister of Wang's typical customer. On Roi's runway there were similar horizontal-stripe sundresses that alternated opaque and sheer fabrics, colored tulle and sheer blouses, though at Roi, those shirts were worn in a schoolgirl style under a fitted cashmere sweater and pleated skirt, while at Wang, loose blouses were paired with more formal skirts.

Too bad Roi didn't show a wedding dress -- her boyfriend, Marc Beckman, proposed with help from models holding signs that read "Will you marry me?" as they strutted out for the show's finale. A visibly shocked Roi trembled as she embraced Beckman while family and friends rushed the runway.

Tommy Hilfiger's show on Thursday night had its own kind of scene as the paparazzi went crazy for a front row that included Jennifer Lopez, Janet Jackson, Sean "P. Diddy" Combs and Nick Lachey.

"That was Tommy at his best," said Combs, who isn't holding a preview of his spring 2005 collection this year.