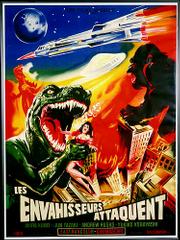 French poster for "Destroy All Monsters" (1969)

Bill Tsutsui remembers the 1970s Saturday afternoon he saw "Godzilla" on his family's Zenith television. He lay on his stomach and watched in wonderment as a creature double feature introduced him to the abominable green monster that's fascinated him ever since.

"For a long time, I thought I must be the only Godzilla fan in the world," says Tsutsui, an associate professor of history at Kansas University. "Before the Internet came along, it was very rare that you'd meet anyone else who had a lot of affection for Godzilla -- or at least would admit to it in public."

When TriStar released its 1998 version of "Godzilla" starring Matthew Broderick, however, Tsutsui began to realize how thoroughly his favorite beast had penetrated the global consciousness.

Take the suffix "-zilla." It didn't mean much before Japan's giant irradiated lizard came along, but it's ubiquitous now.

"Anything big and mean and angry is a something-zilla," Tsutsui says. "Bridezilla, truckzilla, carzilla -- It's amazing to me that you can go on Google and run crazy things like 'spoonzilla' and 'clockzilla' and get hits."

at The Spencer Museum of Art every day through Sunday, Dec. 19

A new exhibition at the Spencer Museum of Art demonstrates just how prevalent Japanese pop culture has become since the 1954 release of "Gojira."

"Pop Goes Godzilla: Japanese Pop Culture & Globalization," on view through Dec. 19 in the museum's Asian Gallery, arose when museum staff found out about a late-October conference organized by KU's Center for East Asian Studies. Scholars from around the world will consider the Godzilla films and their lasting impact on global culture during the four-day symposium, which coincides with the King of Monsters' 50th birthday.

Maria Roman Navarro, Spencer's curator of Asian art, recognized the event as an opportunity to display the only piece of contemporary Japanese art in the museum's collection, "Oval Sitting Atop a Cosmos Ball," by Murakami Takashi. The toy-like plastic sculpture was a gift to the museum in 2000 but has never been displayed, Navarro says.

Tsutsui, who loaned the museum a poster and several lobby cards from Godzilla movies for the exhibition, expressed interest in expanding the show, and Navarro and Asian art intern Kyungwon Choe hatched a categorical scheme for the show.

"What I was hoping to do was really to appeal to a younger audience," she says. "Many people wish we had more modern things shown."

The first uses film posters, a print and manufactured products from private collections to tell a story of the creature's evolution from his post-World War II temper tantrums through his 1970s incarnations.

Twenty-seven Godzilla films have been released in Japan, Tsutsui says, and there's one more coming out this year. Filmmakers are promising the 50-year-old beast will die, Tsutsui says, but he's died a couple of times already, so who knows what that means.

In addition to movie posters, the Godzilla enthusiast loaned the museum several toys, including his very first: a tin, remote-controlled Godzilla that shuffles along and issues staticky monster roars.

"I got it as a gift from someone in Japan, and I just thought it was the greatest thing on earth," Tsutsui says.

He's sure the exhibition will open people's eyes to the prevalence of Godzilla in mainstream culture.

"I think some people still just don't connect some of this imagery and these linguistics," he says. "Part of it is that most of the movies are not such great works of cinematic art that you're going to remember them. They're not 'Citizen Kane.' We can acknowledge that."

The icons section of the show demonstrates how characters from Japanese comic books (manga) and animation films (anime), as well as character products like Hello Kitty and Astro Boy, have become widespread pop culture exports.

A Buddhist good luck charm (omamori) takes the form of a Hello Kitty, signaling the transference of pop culture to the traditional religious realm.

The artist loaned the work, whose title references a racial epithet used in the United States during World War II to refer to the Japanese. Which raises another point: The Spencer exhibition presents a light-hearted representation of a culture that has a history of being demonized in America.

"Seeing this history of Japanese pop culture and the way it has really seeped into all corners of American life shows that globalization is not this simple story of everybody being like us," Tsutsui says.

The final section of the show is meant to illustrate the difference between American pop art of the 1960s and contemporary Japanese pop art.

While American pop artists were influenced by mass production and new advertisements, their Japanese counterparts have been more influenced by new technology, such as video games and computers.

Murakami's "Oval Sitting Atop a Cosmos Ball" fits into this category, unmistakably revealing Japanese pop culture as its main reference.

This aspect of the exhibition is what most interests Shimomura, who notes that the Japanese word kawai (which means cute) has been studied quite seriously by social anthropologists for many years.

"I think what we're seeing today in this exhibition is sort of the fruit of that investigation, that things heretofore considered to be under the purview of children and the youth can be taken seriously," he says.

That's reassuring news for Tsutsui, whose kid-at-heart fixation with Godzilla is here to stay.

"There's just something so alluring about seeing those monsters battling it out and seeing those bad special effects and the bad dubbing and laughing with it -- but also really getting into it," he says.

Maybe this will get me out of the weight room....