Venice, Italy — Mike Leigh's "Vera Drake," a film about an underground abortionist in 1950s England, won the Golden Lion for best picture Saturday at the close of the 11-day Venice Film Festival.

"Vera Drake" is another of Leigh's raw, naturalistic films dealing with social issues in Britain. This time the setting is London of half a century ago, where a seemingly unexceptional housewife is secretly performing abortions. 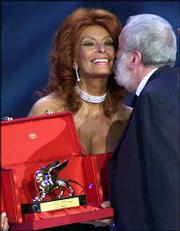 "In a cynical world, it is a wonderful thing and most reassuring when low-budget, serious, committed, independent, European films are recognized and encouraged in this way and helped to reach their audiences," Leigh told the awards gala at central Venice's Fenice theater.

Leigh, 61, is famous for drawing out stunning performances from his actors, and this time was no different, with Imelda Staunton taking best actress for her role as Drake.

"I do think it deals with a complex subject with such compassion," she told the audience.

Leigh is known for disturbing and emotional films such "Secrets and Lies" (1996) and "Naked" (1992). His intense approach often requires months of working on character development with the actors.

The runner-up of the night was the Spanish film "Mar Adentro" ("The Sea Within"), by "The Others" director Alejandro Amenabar. The film had been touted as a possible best-picture winner, but instead it took home the Silver Lion Jury Grand Prix. Star Javier Bardem won best actor for his role as a quadriplegic man who wants to end his life.

Some 22 films were in competition for the Golden Lion awards. The nine-person jury was headed by British director John Boorman and included filmmaker Spike Lee and actresses Scarlett Johansson and Helen Mirren.

This year's festival was notable for its shaky organization, and the awards ceremony preserved the trend, with confusion over who had won some of the big awards.

The presenter, Italian actress Claudia Gerini, initially presented Amenabar with a Silver Lion, then announced it was time for the Golden Lion for best picture. However, she'd left out the Silver Lion Jury Grand Prix for Kim and appeared to have mixed up his prize with Amenabar's.

"Sorry, I missed a prize," she said with embarrassment. "We haven't arrived at the Golden Lion."

The most common complaint was that screenings started late, sometimes by over an hour.

A late-night presentation of Johnny Depp's "Finding Neverland" didn't begin until after 2 a.m. Another long delay preceded Al Pacino's "The Merchant of Venice." And part way through a screening of the film "Eros," the projectionist mistakenly began showing a completely different film.

Nonetheless, Saturday night was a moment for celebration.

"Singin' in the Rain" co-director Stanley Donen won a lifetime achievement award and, on the prodding of hostess Sophia Loren, the 80-year-old did an impressively nimble dance routine across the stage.

"I had a great life. I made a lot of movies. It's not over yet. I'm gonna do some more. And I'm just thrilled to be here," he said.