Warhol soup for the Kansas soul 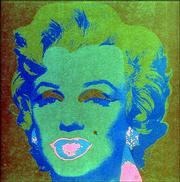 "Marilyn," 1967, from a portfolio of 10 screenprints by Andy Warhol

Andy Warhol famously said he painted Campbell's Soup because he used to eat it every day for lunch.

Whether that was true is anybody's guess; Warhol was a notoriously tough read.

But his comment gets at the genius of his nearly three decades of iconic artwork, says Kansas University art history professor David Cateforis, who co-curated a Warhol exhibition that opens today at the Salina Art Center.

"Campbell's Soup, I think, is almost timeless in its appearance, in its associations. We think of soup as a product that we eat because it's convenient, because it's warm and nutritious, it makes us feel good," Cateforis says. "And Warhol appropriates all of those associations for his art so that we look at his soup cans and all of the qualities that Campbell's Soup evokes for us as a product become part of the content of Warhol's art."

A further testament to the impact of Warhol's art, says Saralyn Reece Hardy, director of the arts center and co-curator of the exhibition, is its lasting relevance nearly two decades after his death. The Salina show hones in on Warhol's influence on contemporary art by juxtaposing his work with that of present-day artists Michael Bevilacqua, Yasumasa Morimura and Lucinda Devlin, each of whom uses art to explore one of the Warholian themes from the show's title, "Commodities, Celebrities, Death & Disaster."

"For me, the most compelling aspect of the exhibition is that artists remain committed to posing questions about the world that we live in," Hardy says.

Consumption, celebrity, disaster
Cateforis created the exhibition's three categories after sifting through Warhol's classic pop art of the early 1960s. In the show, a series of prints of Campbell's Soup cans, a stamped sheet of S&H Green Stamps and a sculpture of a Heinz Tomato Ketchup box represent Warhol's focus on consumerism.

Similarly, contemporary painter Michael Bevilacqua incorporates brand name logos in his graphically bold works, but he borrows only high-end labels, such as Gucci and Yves St. Laurent. He mixes these with the names of bands like Oasis and The Clash, as well as images from fellow visual artists.

When it comes to celebrities, the show's second theme, it's hard to get much more iconic than Marilyn Monroe, perhaps Warhol's most recognizable celebrity subject. The original blond bombshell is joined on the gallery walls by classic beauties Elizabeth Taylor and Jackie Kennedy -- all of whom made Warhol's A-list of photo-based portraits.

Echoing the artist's fascination with celebrity is Japanese photographer Yasumasa Morimura, who impersonates film stars such as Audrey Hepburn and Marlene Dietrich in a series of photos that blur cultural, racial and gender boundaries and illustrate Western culture's influence on Japan.

Complementing them are photos by Lucinda Devlin, who documents empty lethal injection chambers and electric chairs on film. 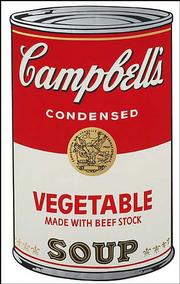 Andy Warhol's "Campbell's Soup I, Vegetable," 1968, from a portfolio of 10 screenprints on loan from the University of Michigan Museum of Art, is part of "Commodities, Celebrities, Death & Disaster," an exhibition at the Salina Art Center.

"All three of these artists are going to open people's eyes and perhaps make them see Warhol in a new way," Cateforis says.

'Pop goes pop artist'
Born Andy Warhola in 1928, the artist rose to fame in the '60s after working in New York as a successful commercial artist and illustrator.

He became known as much for his shameless appropriation of mass media and advertising sources and his unconventional mass production methods (one critic called him "the Henry Ford of art") as for his self-constructed and downright bizarre public persona. Who can hear "Warhol" without thinking of an aloof, silver-wigged freak?

The artist attained a level of fame during his lifetime that few artists experience. He crossed over into film with experimental efforts like "Chelsea Girls," "Empire" and "Blow Job."

But not everyone was a fan.

In 1968, Valerie Solanis -- founder and sole member of SCUM (Society for Cutting Up Men) -- marched into Warhol's New York studio, known as the Factory, and shot the artist with a .32-caliber revolver, puncturing his lungs, spleen, liver and stomach. One New York newspaper documented the attack with this headline: "Pop goes pop artist."

Despite the severity of his injuries, Warhol survived. He continued making art, writing books and creating television shows until his 1987 death after routine gall bladder surgery.

But the Salina show isn't a retrospective. It's not comprehensive, although it does contain about 30 Warhol works. Nor does it attempt to address the artist's rise to paparazzi-worthy notoriety.

Andy Warhol's "Electric Chair," 1971, from a portfolio of 10 screenprints on loan from the University of Michigan Museum of Art, is part of "Commodities, Celebrities, Death & Disaster," which opens today at the Salina Art Center.

Instead, Cateforis says, it crystallizes those pioneering years before Warhol became much like the very celebrities he seemed so obsessed with.

"I believe, as do many critics and historians, that Warhol is one of the most important artists of the 20th century," Cateforis says. "I think that this show will help to make that point. You can't walk into that Warhol gallery without being really bowled over by the iconic quality of these images."

Yasumasa Morimura's "Ambiguous Beauty," a 1995 offset lithograph on loan from the Spencer Museum of Art, is part of the celebrities section of "Commodities, Celebrities, Death & Disaster," an exhibition that opens today at the Salina Arts Center. The show juxtaposes works by contemporary artists with those of pop artist Andy Warhol.