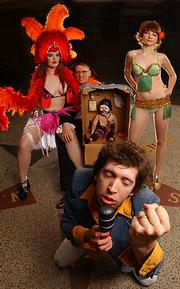 That's the common perception at least. Even under the auspice of vaudeville entertainment or feminist propaganda, burlesque at its most artsy and enlightened can still create blue balls the likes of which strip clubs can only dream.

Rita Brinkerhoff is perfectly aware of that fact.

"Vintage burlesque was about turning on dudes," said Brinkerhoff, a figurehead of Kansas City's suddenly hot-and-trendy burlesque scene and founding member of the Burly-Q Girlie Crew. "When people are like, 'Burlesque is about how women can represent themselves and take control of their lives!' I'm like, 'Yeah, Burlesque was actually just a precursor to stripping.'"

But just because Brinkerhoff acknowledges the physiological repercussions of hot women stripping down to pasties and g-strings doesn't mean she caters to the whims of randy perverts. In fact, if you're not careful, you might be the butt of one of Brinkerhoff's elaborate jokes.

"It's always been for me about making audiences feel kind of awkward and not really about making their dicks hard," said Brinkerhoff. "I'm pretending to be a 60-year-old lady, I'm wearing my Grandma's wig, there's a song about my bathroom playing - it's not that hot."

The 'Blow' show
Brinkerhoff's latest obsession is Thrill Time A-Go-Go, and of all the burlesque incarnations that have swept the area in the last few years, it's probably the most likely to induce full-belly laughs (woodrows notwithstanding).

"I took my friends and they're like, 'I don't feel dirty watching your show - I don't feel like I'm a creepy asshole who should be putting a bunch of dollars in your underwear,'" said Brinkerhoff, whose stage character "Temper Tantrum" is known for her rousing flamenco rendition of AC/DC's "T.N.T."

"Sure, there's hot ladies and there's boobs, but if that was all there was I wouldn't really want to be in it," she said. "I would just be like, 'Yeah, why don't I work at Bazooka's and make a lot of money?"

"It's a little bit on the Andy Kauffman side," said Rush, who composes much of the troupe's original music and emcees the evening as Blow-Chi. "It's definitely dazzling and I hope overwhelming."

The roots of Thrill Time trace back to three years ago when Brinkerhoff founded the Burly-Q Girlie Crew in Kansas City. After only one benefit show the crew was suddenly the talk of the town, with the local press hot on its heels. Before Brinkerhoff could say "Gypsy Rose," she was heading up an ever-expanding 30-girl roster of dancers.

"Everyone was like, 'I'm in it! I'm in a troupe!'" Brinkerhoff recalled. "Burlesque just kind of got a little overplayed. This whole area -- Kansas City, Lawrence -- just kind of grabs a hold of something and beats it to death really quickly."

The Coconut Bra Ballet
Enter Blow-Chi. Initially hired as an emcee for the Burly-Q shows, Rush and Brinkerhoff -- old friends whose parents once dated -- struck up the idea of consolidating the show to a tight-knit group of friends. Rush's wife Laurel Birdsong Sears offered her talents and Brinkerhoff's boyfriend Gary Huggins came aboard as The Amazing Dr. Incredible, a crackpot magician adept at card tricks and spinning plates. 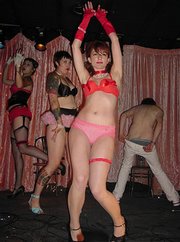 For Sears, a classically trained ballet dancer, the opportunity came along at just the right time.

"Ballet is a very obsessive art form ... It's not really very holistically creative," said Sears, who spent her teenage years dancing pre-professionally in Kansas City. "There's something so slapstick about burlesque that's it's really intriguing and involving and it's not just taking off your clothes."

"I've seen more old movies and more musicals than most anybody my age, so if there's anybody who can do a number with coconuts as a bra, it's me," she said. 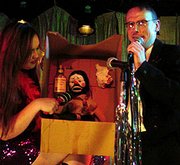 "They did not get it," recalled Rush. "People clapped and stuff but nobody was in on it ... I guaranteed it for a shitload of money though, so I didn't care who liked it."

Fortunately, the troupe's show last June at the Jackpot Saloon fell on a much more appreciative audience. The show transformed the packed bar into a swank speakeasy with velvet curtains and plenty of glitz and glitter.

Thrill Time's closest cousin in Lawrence is probably the Contra Naturam fetish troupe. Though these Goth-clad performers sometimes incorporate dance routines and burlesque elements into their monthly Bottleneck shows, they tend to lean more towards the S&M and bondage tip.

A recent performance by internet punkish-porn purveyors The Suicide Girls at The Bottleneck promised burlesque but fell short of its tag, instead delivering skit-driven T&A. The group has since dropped the "burlesque" moniker in favor of "Suicide Girls Live." 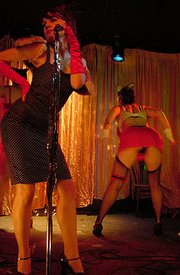 While Thrill Time's cast stops short of calling the show a feminist statement, its female members don't discount the notion that burlesque can be an empowering art form.

"It's not like the riot-girl- or Suicide-Girl- 'I'm going to write 'slut' on my arms and show you my tits' thing," Sears said. "It's just undermining traditional notions of what women do and what is pretty and what is sexy ... notions that say she's gotta be skinny and blonde and have big fake tits."