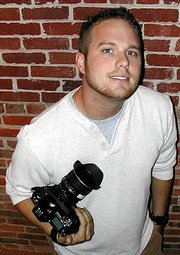 But if you like reading about butts, you're in so much luck you could moonlight as a freaking leprechaun.

As a member of Phi Delta Theta fraternity, Nick was never a stranger to the party pic phenomenon. A self-proclaimed "party pic whore," he had always taken every opportunity to insinuate himself into as many of these candid event portraits as he could. That, combined with a lingering interest in photography dating back to childhood, made the jump to professional PPP an easy decision. One call to University Photography's (1804 E. 1500 Rd.) campus manager and Nick was ready to quaff deep the heady potion of sorority girls, booze, and accidental nudity. And butts. And seemingly endless finger-based tomfoolery.

Thusly, the die was cast. Nick's previous photographic experience enabled him to do his first assignment after little more than an introduction.

"I came in so fast that they didn't have time to train me," Nick reports. "They just said, 'We have this event. Can you go shoot it?'"

That was the beginning of what has since become a three-year tenure at University Photography, where an assignment may include shooting more than 500 party pics in one evening. But as unexpected as that trial-by-fire first assignment may have been, it didn't compare to his most memorable job: doing party pics for the Ringling Bros. and Barnum & Bailey Circus. Asked to dress as a Ringling Bros. trainee, the blue-vested photog had to spend some time backstage while waiting to shoot.

"I was sandwiched in between two elephant butts for a while...," Nick squeezes out.

This experience with ill-tempered, amply-bottomed creatures would come in handy on later assignments.

"You've gotta be real patient, 'cause you're that one sober person in a group of about two to three hundred drunk people that are wantin' pictures," says the long-suffering shooter. "Lots of people are grabbing at you, pulling on your arm. I got kicked in the butt last week by some girl. People are extremely rude - I'm sure they don't mean to be. They're just drunk..."

So what keeps Nick coming back to these less-than-perfect work surroundings?

"I've gotten felt up many times."

But tradition and decorum prevent a good-natured goosing by a tipsy sorority girl from progressing into impropriety. Or not.

Scientifically speaking, there is a phenomenon that occurs whenever booze, cameras, the Greek system are mixed - a little something called "The Snoop Dogg Principle."

"We've had a lot of accidental nudity," says Nick. "Or intentional nudity."

Unfortunately for everyone involved, it's more "Boys Gone Mild" than "Girls Gone Wild."

"I don't think I've had anything but butts," Nick says cheekily.

And then there was the Rock Chalk Review cast party from two years ago. While doing the routine upload of all photos taken at that evening's event, Nick got the surprise of a lifetime!

"I ran into a lot of butts," says the shocked photographer.

Even with all of the groping, drinking, and groping going on, if he's working, Nick doesn't partake. In the drinking. But although University Photography doesn't allow their photographers to drink on duty, sometimes the line between subject and artist can blur after hours. Really blur.

"It was about 4 o'clock in the morning and I ended up at one of the sororities, and I had to call my brother to come and pick me up," says Nick. "I don't really remember a whole lot. But I went out to the studio to do uploads, and I was actually too drunk to do uploads. I ended up setting off the security alarm at the studio twice."

And in addition to learning how to impress a boss, Nick is willing to share the other pearls of wisdom he's picked up in his years on staff.

"I don't know if I've really learned any lessons from being a party pic photographer," expounds Nick.

But after three years of being surrounded by women who love having their picture taken, Nick's picked up a thing or two about how to approach that special someone.

"I think I've done that a couple of times," says an earnest Nick. "Especially when I'm getting groped."