She may be Miss America, but for 50 years she's been married to television.

The tube has linked the contest from its Atlantic City, N.J., home to millions of heartland living rooms and made winners into stars. But lately, the relationship has turned bumpy as ratings dipped and TV executives took more control. 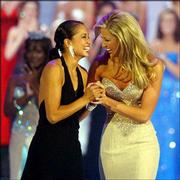 "If Miss America ever finds itself unable to be on television, I think it will probably go out of existence," said Leonard Horn, a former Miss America Organization CEO. "I don't think it can survive without television."

As the pageant celebrates its golden anniversary on the small screen at 8 p.m. Saturday on ABC, the show is getting its biggest makeover ever in hopes of reclaiming relevance in a world of multiplying entertainment options.

The master of ceremonies will be Chris Harrison, normally seen hosting "The Bachelor" and its sister show, "The Bachelorette." The swimsuits will be provided by Speedo -- and skimpier than ever. The program has been trimmed from three hours to two, but "off-the-cuff" backstage scenes have been added. And instead of seeing the talent performances of all five finalists, viewers will see only the final two.

Acting Miss America CEO Art McMaster disputes the notion that ABC has forced the competition to change, but said the television show was the essence of Miss America.

"We've never shied away from the fact that television is the catalyst that promotes the whole Miss America system," McMaster said. "It shows America what we're all about."

Alas, Miss America is no longer what it once was. In the 1950s and early '60s -- before cable, satellite dishes and DVDs -- the televised pageant was the Super Bowl of its day.

Television's money enabled Miss America, first held in 1921, to withstand the feminist backlash of the 1960s. Horn said that was because the pageant's scholarships kept women competing, sometimes despite their political objections.

One of the most famous Miss Americas was the first to be crowned on television: Lee Meriwether, who in 1956 became one of the first women on NBC's "Today" show and played Catwoman in the 1966 "Batman" movie.

Would she have gotten those breaks without her pageant being on television? "Probably not," she said, "because what it offered was more recognition."

Today, the program is not reaching as many young girls -- or anyone else -- as it once did. Some 27 million viewers saw the first televised Miss America coronation, making it one of the highest-rated moments in the history of television to that date. By 1960, the viewing audience had grown to 85 million.

But last year, 10.3 million viewers tuned in for the competition won by Miss Florida, Ericka Dunlap.

But the event isn't doing well compared with other programming. For example, prime-time coverage of the summer Olympics on NBC attracted at least 18 million viewers each night -- and sometimes more than 30 million. Episodes of "CSI" competing with the Olympics drew bigger audiences than last year's Miss America.

Robert Thompson, a professor of pop culture at Syracuse University, said it was remarkable that the show had lasted as long as it had. He said he watched because it was part of his job, not because he enjoys it.

"What Miss America used to do, there were not a lot of opportunities to see that kind of thing that Miss America afforded: women parading across the stage in bathing suits and evening gowns," Thompson said.

On the other hand, Miss America has all the elements of some of today's most-watched reality television shows, Thompson said: "It's a contest that eliminates people and features beautiful young women. Those are hardly the kinds of things that are the kiss of death of a television show."