Burnout 2 will forever be known to me and my friends as the first game that made us stop playing Halo religiously. With its highly addicting crash mode, where you wreak as much traffic havoc for money, and fine-tuned racing, it was near impossible to put down. Burnout 3: Takedown adds online play, new modes, better graphics and some mind-blowing gameplay elements that make it the best arcade racer in history. No kidding. 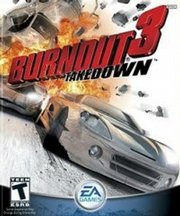 Burnout 3's world tour mode takes you through all types of game modes to unlock cars, crash junctions, trophies, headlines and other goodies. The only way to unlock the many crash junctions for multiplayer fun is to play the world tour. Developer Criterion wants you to experience that single player races, face-offs and road rage matches are just as fun. And yes, they are.

The main new element to the Burnout series is the "takedown." Simply, you try to knock your opponent into walls, other cars or solid objects to cause them to wreck. If they do, you are awarded with a takedown. This is especially important to perform in the Road Rage mode, where you are awarded medals based on how many takedowns you get before your car gets totally trashed.

The great part is, the AI is ruthless. Enemy cars will take no mercy on you. They will try to shove you into walls and cars with no conscience. It's extremely invigorating and it's almost as if they are real human players. So, you got taken down by an enemy? You still may be able to take them down as you crash. How? The new "aftertouch" system allows you to put your crash in slow motion, or "impact time." In impact time, you can slightly influence the trajectory of your car as its crashing, possibly being able to veer into other enemy cars to get an aftertouch takedown. Realistic? No. Incredibly fun? Totally. The only gripe with the aftertouch system is that the camera doesn't always give you the proper angle to set up the aftertouch takedowns. Manual control of the aftertouch camera seems like a no-brainer that is sorely missing. Not to mention there is no map on the user interface to indicate how much of a race you have left.

The crash mode has 100+ junctions to unlock versus 30 from the previous game. You can even unlock a bus and trash truck to ram your way to cash. New to the mode is the "crashbreaker." After causing a pre-defined amount of cars to crash, you can press the crashbreaker button to detonate your vehicle, sending surrounding vehicles flying with correct trajectory and allowing you extra impact time to veer into other vehicles you may have missed. There are also extra crashbreakers in the junctions themselves, adding a second or sometimes third detonation for even more fiery goodness. The object is still to earn medals by getting the most monetary damage out of your crash. Many of them boil down to veering your vehicle into the 4x multiplier bonus, which quadruples your end cash. And hey, just like the last Burnout, you may not even play for money after awhile. You may just play to make the coolest looking crash. The physics and driving mechanics are so finely tuned that it's infinitely addicting to play...and watch.

Some notable omissions from crash mode are perplexing, however. Using impact time is limited to whenever the automatic camera decides to show other areas of the crash, which sometimes totally defeats the purpose of controlling your car for the extra bonuses. Again, this is another instance where manual camera control is imperative. In Burnout 2, the replay showed the crash over and over from up to 4 different arrangements of angles. Here in 3, there is only one replay. You can't change angles and unfortunately much of the replay is seen from the exact perspective of your gameplay. Plus, some of the monster crash vehicles are so big, that it totally obscures your field of vision, which makes you use the first person mode. Criterion should've added more than two fields of view. Also, there is no way to save replays. Boo.

Okay, even though I just dedicated an entire paragraph to the game's shortcomings, it must be said that the wonderfully brilliant core gameplay overshadows the downers.

Playing online, assuming EA's network isn't screwing up, is a pure joy. You can participate in Team Crush, Party Crash, regular Race and Road Rage with people all over the world. This is currently my favorite console online game not only because the game is fun, but because many of the users aren't so serious, so you won't run into ridiculous attitudes. It truly feels like a "friends-on-the-couch" atmosphere.

The amount of car parts and sparks that fly during crashes is certainly eye-catching. It makes the experience so much more enjoyable. Also, when in impact time, the music stops and there are several types of atmospheric warblings and spatial effects that make you feel like you are truly in control of time. It's absolutely sensational. Burnout 3 is so pleasing on a visual level. The amount of detail in creating the tracks and vehicle models is commendable. The announcer sounds like this was his first voice-over job and is immediately annoying. Luckily, he can be turned off. Many of the supplied songs from indie rock bands don't belong in a driving game and just don't make much sense. The Xbox version has the luxury of importing your own songs.

Burnout 3: Takedown is spectacular. At its core, it's the single best arcade racer you will ever play. There is no room for argument. There are so many standards set by it that the only arcade racer that I can predict that could beat it is Burnout 4, if we ever get so lucky.