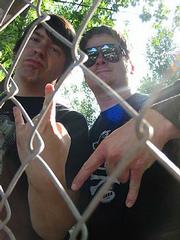 Eric Melin attending Ozzfest shouldn't come as much of a surprise.

The hard-hitting drummer is known for rocking out with the same intensity of a Geezer Butler or a Dave Lombardo (albeit for slightly less satanic bands).

This year, however, Melin had a new agenda for Ozzfest -- one that didn't involve making the rounds with his recently broken-up band Ultimate Fakebook. Armed with a smuggled-in camera, Melin was out to get some perspectives on the new Metallica documentary for his public access film-buff show "Scene Stealers."

When he finally got a shot at Slayer frontman Tom Araya, he did what any wet-behind-the-ears, public-access journalist would do to get primo footage.

"I told him I had a metal TV show on cable access and I wanted to ask him a couple questions about 'Reign in Blood' and 'Seasons in the Abyss,'" Melin said. "He said, 'What are the questions?' So I made two up off the top of my head and then as an aside I kind of pretended to throw in the question about the Metallica movie."

The episodes will also be archived here on lawrence.com.

Part 1: At the drive in intro, Without A Paddle and Exorcist reviews

Creating the first episode of "Scene Stealers": A journal

The ruse turned to gold, as Araya responded candidly and Melin left with the sound byte he was looking for. Amazingly, a couple days later, Melin was in a Kansas City hotel room interviewing E. Elias Merhige, director of "Shadow of the Vampire" and the upcoming flick "Suspect Zero."

Needless to say, "Scene Stealers" is off to a running start. The movie review show -- featuring Melin and former Ultimate Fakebook/Creature Comforts guitarist J.D. Warnock -- debuted Monday on Sunflower Broadband Channel 19 and will run new episodes every two weeks. The episodes will also be archived here on lawrence.com.

According to Warnock, the idea for the show started when he and Melin would get in titanic arguments over movies while hanging out in UFB. Those arguments turned into the brilliant idea of posting movie reviews on the band's website, and Melin began pursuing the idea of a TV show.

"I always dismissed it like, 'Yeah, OK, right buddy. You set that up and then give me a call," Warnock said. "And he basically did exactly that. He waited until he got all the people in place and then called me and said, 'OK, we're doing the show and you can't get out of it.'"

For Melin, who will return to school as a KU film student this fall (13 years after dropping out of K-State), "Scene Stealers" marks the first step towards what he hopes will become a full-time movie critic's career.

"I cried when Gene Siskel died -- that's not an exaggeration," Melin said. "I knew he had the brain tumor because I'd seen his downward spiral on TV. He once suggested that James Woods be nominated for an Oscar for John Carpenter's "Vampires" and I was like, 'Oh my god, Siskel's really losing it, that brain tumor fucked him up.'"

"God rest his soul. He was the only other person I know that liked "Babe 2: Pig in the City" as much as me."

Melin's encyclopedic knowledge of useless movie trivia and Warnock's blunt opinions provide the crux of the show, which takes place Wayne's World-style on the duo's home sofa. Movies are judged on the duo's patented "rock-fist" rating system, which includes such variations as "huge rock fist up" and "minor rock fist down." 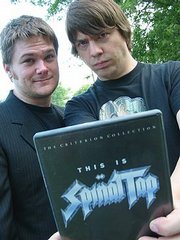 "We're just hoping that the dialogue is interesting enough to overlook the fact that it's a no-budget show," Melin said. "Everything has been borrowed or loaned and all the time has been graciously donated by me and about six other guys."

The team edited together the first show with help from Rob Shoffner, a KU film school grad who created Larrytown Productions and recently released a documentary on the Walnut Valley Festival in Winfield. Shoffner said he was intrigued by the prospect of editing a comedy-based show and was willing to work for no pay to help get the project off the ground.

"I just want to create a show that people talk about around town and then maybe one of these days get some sponsorship for it and actually get paid," Shoffner said. "There's not really a show I know of that does movie reviews for our generation."

Runners up: Dancer in the Dark, The Godfather Part II, Out of the Past, Taxi Driver

Melin enjoys the benefits of being a member of the Kansas City Film Critics Circle, which hooks him up with free advance screening passes. Still, he must jump through Hollywood-sized hoops to acquire clips.

"It takes a lot of enthusiasm and a lot of talking your way into things and assuring people that the budget will not be there but the quality will be," he said.

"I think the problem is they find out how much work it is to put a program together," Hoehns said of the 50 people have signed up to be certified producers but have not aired a show. "I can't count many people have come in saying they want to do a 'comedy variety show' and nobody's ever followed up on getting one of those on the air."