Downs, 24, of Birmingham, Ala., outsmarted and outperformed 51 other women in a spiced-up version of the 83-year-old pageant that included a head-to-head showdown between the last two contestants. 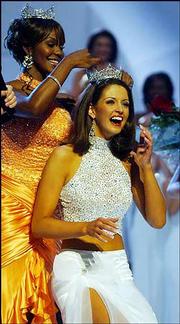 Downs, who sang "I'm Afraid This Must Be Love" for her talent routine, bested Miss Louisiana Jennifer Dupont, who performed a jazz dance for hers.

Downs, who wants to be a pediatrician, will take up the cause of childhood cancer prevention during her reign as Miss America. In fact, she already has: She helped persuade the state of Alabama to offer a "Curing Childhood Cancer" car tag, the purchase of which will help fund cancer research.

Fifty-two women -- including, for the first time ever, a contestant from the U.S. Virgin Islands -- competed for the crown in a two-hour show producers hoped would turn the tide on declining TV ratings.

Taking a page from reality TV, Miss America producers spiced up the prime-time special by enlisting "The Bachelor" host Chris Harrison, crooner Clay Aiken and some new production touches in a bid to keep people watching.

The telecast marked the 50th year since Sept. 11, 1954, when Lee Meriwether was crowned Miss America 1955 during the first Miss America pageant to be televised.

This year's pageant retained the same basic elements, but with plenty of updates, including the Miss America Quiz, an eight-question pop quiz on U.S. history, U.S. government and current events given to the five finalists.

In a nod to successful reality shows like "Last Comic Standing" and "American Idol," Downs and Dupont squared off in a head-to-head talent showdown near the end of the telecast to help the seven-judge panel decide who got to make the tearful runway walk in Boardwalk Hall.

Downs will get more than that, though: She earned a $50,000 college scholarship, a modicum of overnight celebrity and a yearlong reign that can net up to $200,000 in appearance fees.