Much has been made about how the events of Sept. 11, though tragic, brought people closer together.

Less often told are stories of relationships rended in its aftermath. 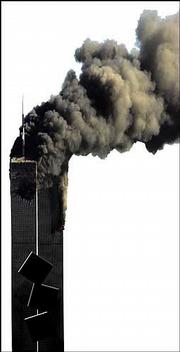 Those are harder to swallow.

Repercussions for such revelers -- at least in America -- were swift. In Michigan, one restaurant went from booming business to ghost town after what turned out to be mere rumors of jubilation.

Florida and Virginia residents second-guessed their judgment after realizing their neighbors -- their friends -- had piloted airliners into buildings full of people.

The point is, 9-11 jarred perceptions.

And though undoubtedly more painful for those directly involved -- people who lost spouses, parents, children and friends -- the assaults sent out a shock wave that interrupted personal relationships across the country.

In a fictional Pennsylvania household -- invented by Weiner for her new play, "Fallout" -- the damage is immediate and irreversible.

Julia lives quietly and alone until her niece Emily moves in and convinces her to take in a boarder. Essam, an Egyptian doctoral student, moves into Julia's home, and the three become fast friends, sharing movie nights, dinners and holidays.

Something happens -- to reveal it would spoil the play's surprise -- and, suddenly, Essam decides to cut his stay short and return to Cairo. 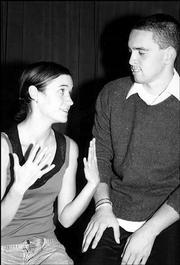 "The driving force in the play is Emily's desire to know exactly why he's moving out and why he's going back to Egypt," Weiner says. "She expects it's because he's Mid-Eastern, but there are things she doesn't even know about him.

"The play is kind of about assumptions that we form about other people based on limited information. It's about how people kind of keep certain parts of themselves back from one another."

Or, as the play's producers put it: "Painfully, the three of them must learn that some parts of the human heart are better off left in darkness. ... In the aftermath of a tragic event, it is the fallout that leaves the most damaging, lasting scars."

Weiner, who teaches in Washburn University's theater department and has been writing original scripts for 12 years, says she tried to put herself in the position of "the other" when working on "Fallout," which she began writing shortly after 9-11. She remembers being truly shocked to learn that some of the terrorists involved in the attack were Egyptian. She had always understood that the country was America's friend in the Middle East.

So she started studying. She talked to an Egyptian woman and her husband who lived in Lawrence.

"I found out that a lot of Egyptians hate Americans, and part of the reason is because they're dependent on us. I think he (the husband) told me that one-fourth of the grain used in Egypt is provided by America," Weiner says. "They hate us because they're dependent on us, and it kind of messes with your mind when you think, 'So we're doing this thing for them and they hate us for it?'

"But you have to understand also it's because we've wielded that power not so gracefully all the time."

Berrigan Willmott, the Lawrence actor portraying Essam in the play, says it's been difficult to identify with his character.

Willmott, son of Lawrence filmmaker Kevin Willmott, describes Essam as a bit of a drifter. He's moved around his entire life and never felt close to his family. Julia and Emily become his adoptive mother and sister.

They play tells the trio's story -- both the heartwarming and heartbreaking parts -- by moving back and forth between Thanksgiving 2001 and times before the terror attacks. And even though the script relies on that pivotal tragedy as a core element, it's not exploited, says Fran Farah, stage manager and co-producer of "Fallout."

"She can take very serious material and find what is human and kind of funny in the way in which we behave in really kind of stark situations," Farah continues. "I guess that's why we survive situations like that."

"Fallout" fits snugly within the mission of InPlay, the Kansas City production company that's staging the show at the Just Off Broadway Theater.

"We try to tell stories that other people don't tell, stories about minority groups," says Farah, who sits on the InPlay board. "We've done a lot of plays regarding African-American issues. This is the first one that we've done whose principal is a Middle Eastern man, obviously because this is post-9-11."

As far as Farah can tell, Weiner's is the first play in the Midwest to address the 3-year-old tragedy.

"It's touching on something that has some pretty painful nerve endings that people normally don't touch this early on," Farah says.

But Weiner's intention is not to rub salt in wounds. If audience members find cause to squirm in their seats, it's likely because they're bearing witness to certain basic but uncomfortable truths about human nature.

"It's just about little pockets of darkness that exist that we somehow come to live with pretty easily until they get thrown up in our face and we have to look at them," Weiner says.

And hopefully be more open and honest about them.