Jerusalem — Pop diva Madonna made a pilgrimage to a Jerusalem cemetery early today, holding a mystical candlelit ceremony at the grave of a Jewish sage.

The singer is in Israel on a five-day spiritual quest along with 2,000 other students of Kabbalah, or Jewish mysticism. 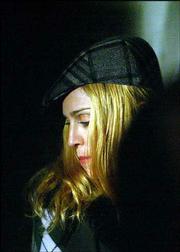 Pop star Madonna prays inside the tomb of Kabbalist Rabbi Yehuda Ashlag, a Jewish mystic, during a visit in the Givat Shaul cemetery in Jerusalem. Madonna, a Kabbalah devotee, is in Israel on a five-day spiritual quest.

Following her graveside visit, Madonna went to the Western Wall, a part of Judaism's holiest site where the biblical temples once stood.

The arrival of Israel's biggest celebrity visitor in years has created a frenzy among her fans and the media. Others have been critical of the star's interest in the esoteric Jewish mysticism.

Madonna was raised a Roman Catholic, but she has become an avid devotee of Jewish mysticism in recent years. She has adopted the Hebrew name Esther, wears a red thread on her wrist to ward off the evil eye and reportedly refuses to perform on the Jewish Sabbath.

No screaming fans were waiting for Madonna today as she arrived with her husband, Guy Ritchie, at the Kiryat Shaul cemetery, flanked by black-clad police escorts, assault rifles slung over their shoulders.

The blue and red revolving lights of the patrol cars cast an eery glow over the terraced, hillside graveyard as the couple walked past the tombstones to the grave of the Kabbalist sage Rabbi Yehuda Ashlag.

Polish-born Ashlag is the renowned author of the Sulam, the ladder, a commentary on the core Kabbalistic text, the Zohar. He died in 1954.

Madonna, wearing jeans, a black and gray checkered sweater with a matching cap and a large diamond encrusted letter E on a chain to symbolize her new name, spent more than an hour inside the stone mausoleum, placing candles on the tomb, praying and chanting.

Led by a rabbi, Madonna and her small entourage recited blessings over food and wine, drank from small plastic cups and circled the raised stone grave. Toward the end of the ceremony, a visibly moved Madonna wiped tears from her eyes.

Adherents of Jewish mysticism believe that praying at the graves of sages can help achieve one's wishes. Millions make pilgrimages every year to the more than 100 of these burial sites across the Holy Land, praying for health, children or to find a mate.