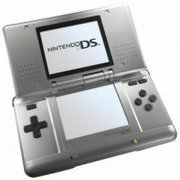 On November 21, the video game world will be treated to the first next-generation handheld. The Nintendo DS will hit store shelves with a $149.99 price tag.

"Nintendo's mission remains unchanged: expand the game experience," says Satoru Iwata, president of Nintendo Co., Ltd. "Nintendo DS is the road map to the future of video games, and most clearly demonstrates the type of innovation that players demand."

Consumers immediately will be able to pick up and play the new system, as it comes with a free software feature, PictoChat, embedded in the system hardware. PictoChat allows DS owners to write messages with an on-screen keyboard or the stylus and send them wirelessly to other DS users nearby. Users can text chat, draw artistic messages or share secrets, all without saying a word. And a Nintendo DS in sleep mode will spring to life if it senses another DS in transmitting range, alerting users to each other's presence and setting the stage for an impromptu conversation or game session.

More than 100 companies have signed on to create games for Nintendo DS, while Nintendo itself is already developing its first 20 titles. Electronic Arts, the world's largest independent software developer and publisher, already has announced that its powerhouse franchises of Madden NFL, The URBZ: Sims in the City, Need for Speed Underground, Tiger Woods and GoldenEye will support Nintendo DS. 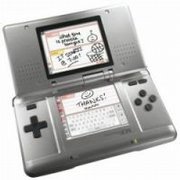 "Each time Nintendo creates a hand-held, it introduces new elements of play and sets a new standard for mobile gaming," says Larry Probst, EA's chairman and CEO. "The DS is no exception - Nintendo has another big winner with the DS."

The complete lineup of games planned for the launch of Nintendo DS will be announced in the near future. In effect, Nintendo DS already boasts a library of more than 550 games because it is compatible with single-player modes of games made for the world's best-selling video game system, Game Boy Advance SP.

Nintendo chose the United States to lead the worldwide launch of Nintendo DS because of overwhelmingly positive and enthusiastic reaction from consumers and to take advantage of the holiday sales season. After the subsequent launch in Japan, the system will be available in Europe and Australia in the first quarter of 2005.

Nintendo DS has a flip-top cover that protects both screens. Two speakers on the unit's face let users hear virtual surround sound, while its dual screens open games to a multitude of possibilities. Nintendo DS sits 148.7 millimeters (5.85 inches) wide, 84.7 millimeters (3.33 inches) long and 28.9 millimeters (1.13 inches) tall with the cover closed. The new media format for games means that Nintendo DS has no moving parts that could be misaligned if the unit is dropped or jarred.