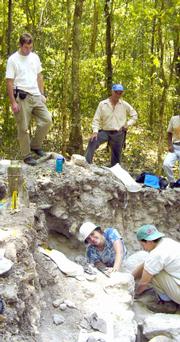 Jessica Craig, in hole, with colleagues at San Bartolo, Guatemala.

"I've known I wanted to be an archaeologist since I was five," says Jess. "I remember my father found a bag of marbles in the roof ... he was re-roofing the house when I was six or seven and found this bag of marbles from 1940, when the house was still being built. And I was fascinated by this little bag."

It wasn't always easy to stay on track. In the forward-thinking world of high school career counseling, Jessica faced people who just couldn't dig her scene, and as a result faltered briefly from her fedora wishes and bullwhip dreams.

"When you say you want to be an archaeologist, they're like, 'Oh, that's cute. Maybe you should think about marketing,'" she recalls fondly. 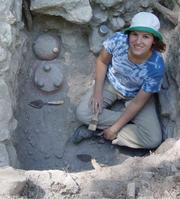 Counting the minutes til cocktail hour.

As a result of this customary spirit-breaking, Jess enrolled at Binghamton University as a Journalism major. It was at Binghamton, after being unable to enroll in any journalism classes, that Jess met Susan Pollack, her first archaeology professor.

"She's a woman, she was an archaeologist, she was doing it," remembers Jess. "And it was totally inspirational for me, like 'Wow, it she can do it, I can do it.' And I think she was certainly the turning point as far as making it a reality... I think I have to chalk it up to Susan - a lifetime interest, and then certainly Susan."

But not "Suddenly Susan." That show was horrible. And although Brooke Shields at one time played Brenda Starr, an intrepid journalist/adventurer, the only thing she dug was Judd Nelson. But what of the Atari 2600's Pitfall Harry, or, more importantly, Indiana Jones, the greatest archaeologist of the greatest generation?

"He's not an archaeologist," she laughs. "He's a professor of archaeology / a collector for a museum. He doesn't dig. He kind of steals stuff for his museum."

Perhaps it's this disregard for her most celebrated peers that is the reason Jessica spends March through May in a hole in Guatemala, while Lara Croft has a sweet mansion and implants. And a butler with a shotgun, which is also awesome.

She instead sites Mary Leakey as a major influence.

"[She was] always in the shadow of Louis Leakey, her husband. They found some of the most important early human finds in East Africa, and Mary was the archaeologist in the team. He (Louis) was the bone expert. This was in the 1940's - she was super cool, a very good scientist..."

Despite a flagrant disrespect for anyone this reporter has heard of, Jessica seems to have a good record going as an archaeologist in her own right. During her first dig, in western New York, she and her colleagues found a pre-Iroquois "longhouse," the communal domicile of the people of that area. And since arriving at San Bartolo, the site of her current dig, she has uncovered a "barrigon" (which translates to "man with big belly"), a sculpture that stands about two meters tall and is quite rare in that region.

But discoveries like this don't come without effort. Jessica's days usually start by 5:30 a.m. After breakfast, the digging starts, and lasts til noon. After a bite to eat, the crew is back to work by one o'clock, and continues to dig until four o'clock. After showering comes the cocktail hour, when the entire project staff talks about the day, trying to speak mostly in Spanish as half of the crew is Guatemalan. After dinner, the crew can work on their computers or go back to the bar.

"There are always cocktails involved," she says. "For some people there are more cocktails than others. ... Archaeologists tend to drink, in general. I think it's the labor, the labor intensive day."

Obviously, it's not just the sherds that are in the bag by the end of the day.

And can archaeology teach us anything in addition to how to keep two pitchers of sangria down in 99 degree weather?

"I think we have a lot to learn from the past when you look at cultures who kill themselves out by destroying their environment, for example. Or fighting with each other. Which are two of the leading reasons why we think the Maya fell. ... So I think we have a lot to learn, but we don't seem to do that. The Maya are just one example. It's happened over and over again in the past, where you see civilizations rise and fall because they completely destroy their environment and start killing each other. And here we are doing it and thinking it's not going to affect us in the same way."

It's a valuable lesson; one that we would all do well to heed. Oh, that and always remember to shut your eyes when opening the Arc of the Covenant.