There they go: Viewers stay away from pageant in droves 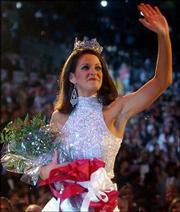 A record-low 9.8 million people watched Saturday's pageant, about 500,000 fewer than last year, continuing a trend that threatens the event's future on network television.

The show, which culminated in the crowning of Miss Alabama Deidre Downs as Miss America 2005, tried to quicken its pace. The telecast was cut to two hours.

Contestants showed more skin than ever, parading in stringy two-piece suits provided by sponsor Speedo, and host Chris Harrison tried to drum up suspense on which contestants would advance.

Also added were taped interviews with contestants, during which one confessed: "I'm incredibly excited and I feel like I'm going to throw up."

While viewership for network television as a whole is on the decline, some believe Miss America's days on television are numbered -- unless it makes radical changes.

"It's time to look at Miss America for what it is -- an event that is a symbol of a bygone era," said Rutgers University professor Steven Miller, a TV expert. "In order to compete against more modern shows, it needs to have a complete makeover."

In another blow to ABC, only 13.8 million peoples watched the 56th annual prime-time Emmys.

The latest figures mark a 22 percent drop from the 17.9 million viewers who watched last year's Emmys on Fox. Ratings dropped even further -- by 34 percent -- among viewers aged 18 to 49, the demographic favored by advertisers.

Before the ceremony, one network executive had expressed concern about the effect of cable TV, which increasingly has cut into broadcast viewership, on the Emmys.

Intended as a kickoff for the opening of the broadcast networks' fall TV season, the awards largely served as a promotion for HBO and a reminder of the major network shows that ended last year, including "Friends" and "Frasier."