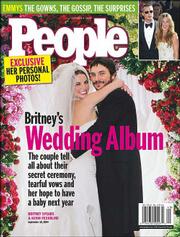 Britney Spears most definitely got married last week, People magazine reports in its Oct. 4 issue filled with pictures of the pop star and her fiance, Kevin Federline, in wedding apparel and surrounded by family and friends.

What the couple didn't do, according to the Los Angeles County Registrar's Office, is file a marriage license after the ceremony.

No big deal, says a member of the singer's camp who declined to be quoted by name.

"They're scheduled to file it next week," she told The Associated Press Wednesday.

"I know we're not completely legal until we file the license, which we'll do next week," the 22-year-old pop star said. "But in a real sense, a spiritual sense, we're married."

Federline, 26, said the delay was caused when the couple moved their wedding date up to Sept. 18 as word leaked out that they were planning to be married Oct. 16.

Moving the date up a month, he said, didn't give their lawyers time to finish their prenuptial agreement.

The couple said their lawyers told them that they have 90 days to file the license.

Spears and Federline had a small wedding at a Studio City home, keeping even the singer's parents and siblings in the dark until hours before the ceremony.

Federline said his 2-year-old daughter from a previous relationship, who was to be the wedding's flower girl, missed the event because he feared if he canceled her previously planned trip to Disneyland that day the reason would leak out.