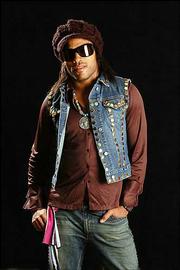 Rocker Lenny Kravitz's newest album, "Baptism," touches on themes like depression, frustration and burnout - all of which started to overwhelm Kravitz a couple of years ago when he was on tour. The singer, who described the work as helping him feel "spiritually reborn," canceled a nationwide tour in August.

New York — In a recent video, Lenny Kravitz cast himself as a hard-living, substance-abusing, wild-child rocker whose life is unraveling behind the scenes.

While Kravitz insists he's never lived that stereotypical rock life, he has been at the point of breakdown. "I was going through a depression," said Kravitz, who canceled a nationwide tour last month. "But you know, you work it out, you deal with it, you figure out, and I'm here now and I'm great.

"I was just going through a time where I had to deal with certain issues in my life."

"Issues" are the focal point of his latest album, "Baptism," which touches on themes like depression, frustration and burnout -- all of which started to overwhelm Kravitz a couple of years ago when he was on tour.

From the outside looking in, it's hard to see why Kravitz would have a reason to be depressed. He's dated models and actresses (including Nicole Kidman), has enjoyed a best-selling recording career, and stays on the celebrity A-list as rock's perennial hipster.

But Kravitz scoffed at the idea that his life was charmed.

"People are people. It doesn't matter what you've got or what position you're in, we all have issues in life, spiritual battles ... all kinds of things that need to be nurtured," Kravitz said.

One of the ways he's tried to nurture himself is to stop being his biggest critic.

"I'm a perfectionist and very hard on myself -- constantly standing outside of myself and looking and critiquing and judging, and sometimes you've gotta just ease up," Kravitz said. "That's the part about learning to love yourself. We're all a work in progress."

Kravitz gets heated when talk turns to the tabloids. He's been a frequent fixture there recently, especially with his high-profile romance of Kidman last year.

"They lie, they do things, they follow you around," he rants. "I'm not looking for the attention. If you catch me coming out of a restaurant or out of a house and shoot my photo, there's not nothing I can do about it."

Still, he manages to laugh he's asked about his playboy image.

"I like the ladies, but I'm definitely looking to settle down and be with one," says Kravitz, the divorced father of a 15-year-old daughter.