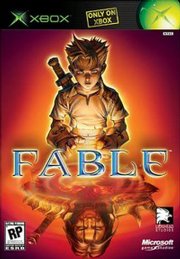 Peter Molyneux, famed creator of the choose-your-morality game Black & White, finally releases his baby Fable on the Xbox. The second-most anticipated game for the console, Fable promises to combine RPG and action elements into a story in which your character physically and socially changes depending on the moral choices you make along the way. The premise had the potential to be a pure novelty rather than a true gameplay alteration. What results is a little bit of both.

You begin as a boy. Your father wants you to traverse your little town of Oakvale in Albion, doing some good deeds so that you may earn money from him to buy your sister a birthday present. It is immediately that you are faced with choices to do good or bad. You find a husband having an affair and you can choose to tell his wife across town about it to earn money. There is a bully beating up a kid and you can choose to beat up the bully or the kid. Very soon, bandits trash your town and tragedy strikes your family. A mysterious dweller appears named Maze, who takes you in and sends you to a training camp called the Guild. It is here you spend your early and teen years learning how to use your melee weapons, ranged weapons and magic, known here as "will." Once you complete training, you get the ability to take on quests. Story-driven quests are differentiated from side quests, so that you know how to advance the core story.

One of your objectives is to get better known by increasing your "renown" score. You do this by showing off your trophies of major enemies you've killed or by completing quests. The more renown you get, the wider your popularity becomes, so quest requests start to pour in from all across Albion for you to take. You also get general experience points with which you can spend on increasing your strength, speed or will. Doing these things allows you to wield heavier weapons, become stealthier or learn new and more powerful magic. You can customize how your character will evolve. It is not necessary to spend experience points in any particular way. This is one of the more rewarding, but direct, ways to change the appearance of your character. You may also buy titles like "Avatar" or "Hood" or "Assassin" so that when townspeople see you, they will start calling you by that title the more popular you get.

You can fart, flirt, belch, marry, buy, sell and rent houses, get haircuts and other everyday activities to get certain reactions from people and customize your local and regional reputation. Many of the gestures really don't add to your morality score, but it gets really engaging in a Sims-type of way. As a matter of fact, I would equate Fable with a fusion of Zelda and the Sims. I guess "role playing game" can suggest a wide variety of things, but outside of a complex leveling-up system, Fable is much more an adventure game.

Doing evil things will earn you evil points. Garnering enough of these will change the way you appear down the road and how people react to you since they have heard of your good works or evil deeds. But there is one major problem with all of this that arises immediately as you decide to commit evil on a story-driven quest. Let's say your quest is to guide some townspeople through a dangerous area. If you wanted to become a bad guy, you would purposely fail the mission and let the monsters kill your travelers. You would even fight alongside the monsters. The problem is that every quest can only be passed by doing what it says, which is generally neutral or good. So although you can spend an innumerable amount of time committing random acts of evil to up your evil score, it would have to all take place in the periphery, making the system almost feel more novel than core.

Still, the sheer amount of things you can do in Albion is staggering. There are so many combinations of weapons to upgrade using different augmentations. There are so many kids to terrorize for no good reason. There are so many clothes to wear at given times to evoke certain reactions out of certain people. Learning to balance all of these characteristics of your world is a patient journey. Sure, you can beat the main game in 12 hours, but there are many more hours that developer Big Box wants you to experience.

The exponentially diverse world of Albion is held together by a main story and combat, however. It is in these elements that Fable shows significant weakness. The underlying story of revenge is fairly mundane and typical, although presented beautifully based on whom you decide to be. The combat mechanics are pretty blah, though. You can lock on to a target to circle your foe and attack to your heart's content. No matter how strong you become, no matter what kind of weapon you prefer and no matter how light the weapon you carry, the melee combat mechanics are sluggish. In intense situations, you will accidentally hit non-enemies, because they don't' have enough sense to get out of the way, and the lock on mechanic can become sporadic.

You can wield an array of ranged weapons, too, like a crossbow and perform magic of the will with the right trigger depressed. You can manually aim the bows/crossbows if you desire, but the process takes too long and there are no rewards for headshots, so you are just as good to lock on and fire away.

Fable's combat excels with magic, however. There are a multitude of spells from lightning to force push to multi-attacks that provide a nice variety. All of these spells can be upgraded to be incredibly powerful. For my first experience, I wanted to be a brawny buff only, but the cool types of magic drew me in to be more of a well-rounded evil boy by the epilogue.

The world of Albion looks big, but feels small. The backdrops beautifully create withered and sometimes vibrant landscapes, but you are very limited to where you can traverse. There are several towns and paths interconnected, but the loading times hamper the continuity of Albion just a bit. Also, many areas can get fairly buggy. Objects pop in out of nowhere and sometimes entire walls and caverns are replaced with the color gray. Also, the framerate is fairly inconsistent, especially in battle. Fable has a hard time locking in at an even 30 fps. These unpolished features suggest a certain amount of rush to finally get this title on the shelves after years of development.

Fable's character and weapon design is near flawless, however. Much care and imagination was used to craft such fantastic creatures. The levels of each weapon (even an augmented frying pan) also have imaginative distinction between them. Fable's art direction is one of a kind.

The score, featuring live orchestra, resembles an epic movie soundtrack. Although the melodies aren't too original, the high production value of the music gives Fable an epic flair. The voice acting is also good, and there is a lot of recorded dialogue to be heard, even though catch phrases of townspeople will get a bit old. The sound effects of walking, creeping, running all have context sensitive sounds depending on the type of environment you dare to tread. Walking on wood sound different than dirt, in other words.

I could go on for pages about all of the little nuances and side quest rewards, but there are so many and I think much of the joy of playing Fable is from personal discovery. It is in this aspect that Fable is quite an achievement.

Fable is a side-quest and customizer's dream. There is enough content here to keep anyone busy for weeks. It's too bad the core story didn't have a multitude of branching storylines as it once was supposed to be. That would've made more sense and could've made Fable a timeless adventure given more polished and purposeful combat. Still, Fable has generally made a good mark for Microsoft, establishing a brand that has tremendous potential.