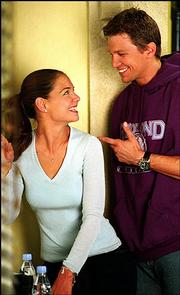 Holmes, left, plays the president's only child who goes off to college her first year and meets a potential boyfriend (Marc Blucas) in "First Daughter."

There's a scene in 1953's "Roman Holiday" where Audrey Hepburn's princess is stuck at another obligatory state function, and she's forced to politely dance for hours with one decrepit geezer after another.

It dawns on the viewer that life as a princess might not be all glass slippers and champagne. In fact, it looks pretty boring. No wonder she chooses to ditch her entourage for a weekend with hunky Gregory Peck.

"First Daughter" attempts a modern take on this same premise. But this time it's the U.S. president's only child who is dealing with the pressure of inflexible schedules, invasive media exposure and a lack of true identity.

Katie Holmes stars as Samantha, who is thrilled to move to the West Coast for her first semester of college. Things are complicated by the fact it's an election year for her family and the threat of terrorism looms over them.

"The last time I had privacy I was in utero," she says.

Sam's commander in chief father (Michael Keaton) hopes to insure her safety by insisting she is flanked by Secret Service at all times. Or as her saucy new roommate (Amerie Rogers) calls them, "a portable set of 'Men in Black' action figures."

Despite all the protection, Sam begins to get doe-eyed (which is not a hard look for Holmes) over a handsome resident assistant on her floor named James (Marc Blucas). When their relationship turns public, a whole other set of problems surface.

The "Roman Holiday"-type princess analogy is hardly a stretch. "First Daughter" wants to make you think it's a fairy tale. It has a storybook intro with narration that announces, "Once upon a time there was a little girl, just like every other little girl."

"Roman Holiday" gets a modern spin with a tale of a sitting president's daughter (Katie Holmes) who leaves the White House for her first semester of college. The film never commits to the more intriguing ideas about privacy it introduces, instead settling on being just another teen-aimed, girl-power throwaway.

All this seems curiously out of place, however.

Director and actor Forest Whitaker ("Panic Room") displays some nice dreamy flourishes, especially during the film's childhood-in-the-White House intro. Yet the scenes that resonate are the one's most grounded in reality, whether during an emotional breakdown Sam has while jogging or during a believable argument with her roommate about hogging the center of attention.

There's some funny stuff in the movie, as when the two bald agents (Michael Milhoan and Dwayne Adway) on her personal detail subtly show their displeasure that they must stand in the room while she is watching the Home Shopping Network. A few not-so-subtle coughs later and she switches the channel to a football game.

Most of the other stabs at humor are watered down by their familiarity. The running gag that wherever she goes she is always being serenaded by "Hail to the Chief" was already explored in the recent "Welcome to Mooseport."

In fact, the release date of "First Daughter" was moved back several months after "Chasing Liberty" tanked at the box office. That movie also featured a lone presidential daughter who gives slip to the Secret Service in order to romance it up.

Those who've seen "Liberty" may not be so stunned by the central plot twist in this picture. Too bad, because it's really the most provocative thing about the plot.

"First Daughter" is always teetering on the edge of becoming a good movie. Its cast is quite appealing (especially Keaton's subtle performance) and the story is cute. But it never quite commits to some of the more intriguing ideas it introduces, instead settling on being just another teen-aimed, girl-power throwaway.

Think how much more potent this film could have been if it were rated PG-13 or even -- gasp -- R. Ditch the princess rigmarole and probe more of the tabloid, frat party, underage drinking, table-dancing stuff that this safe movie only teases the viewer with.

Picture the lead character if she were a mixture of the Bush daughters and the Hilton sisters.