Alumnus gets back to his roots in agricultural 'Amber Waves' 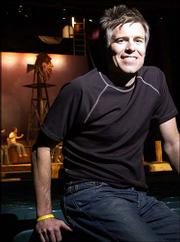 Since graduating from Kansas University in 1982, Pomona native James Still has gone on to achieve international recognition as a playwright and director. He was in Lawrence last week to observe rehearsals of his award-winning play "Amber Waves," which University Theatre will stage this weekend.

In 1990, when Kansas University alumnus James Still wrote his one-act play about a struggling Kansas farm family, the show put an exclamation point on an issue already dominating headlines.

The farm crisis of the 1980s was bleeding into the next decade, prodded by drought, feed shortages and declining prices.

But the devastation didn't stop in the pasture. Hotlines took calls from farmers grappling with depression, alcohol abuse, domestic violence and suicidal tendencies.

In Still's "Amber Waves," which premiered at the Kennedy Center in Washington, D.C., the Olson family battles financial and spiritual despair while trying to hold on to their northeast Kansas farm and each other. It takes the suicide of another farmer to bring the family back together.

By the end of the '90s, however, real-world families whose stories mirrored the Olsons' had fallen out of the spotlight, despite the ongoing plight of farmers.

So when the Indiana Repertory Theatre asked Still to expand "Amber Waves," he didn't miss the opportunity.

"I just found it so infuriating that the media had sort of lost interest in the farm crisis," says Still, who grew up in Pomona. "It was no longer the sexy story. It had been going on a long time, and I understand that, practically, how do you report the same thing? On the other hand, it didn't mean people weren't suffering."

"That gave it a renewed urgency for me."

The full-length, two-act version of "Amber Waves" premiered at Indiana Rep in 2000 and has been produced several times nationally since. On Friday, the show will open University Theatre's mainstage season.

"I've seen more grown men cry at this play than anything I've written," says Still, who was in Lawrence last week to meet the KU cast and observe rehearsals.

"What they've told me, the ones who were bold enough to talk to me, is they just never thought anybody was paying attention. They just never imagined their lives were worthy of this kind of attention, which is heartbreaking to me."

When Still graduated from KU's theater department in 1982, he moved to Chicago and hasn't lived in a city of fewer than 9 million since. But he spent his childhood in a no-stoplight town west of Ottawa. And though his family didn't farm -- his father was a high school basketball coach, and his mother worked at a bank -- agriculture was a way of life all around him.

His parents were the first generation to leave the family farm, where Still himself spent much time as a boy. In fact, his grandparents' farm north of Topeka was another factor that played into his expansion of "Amber Waves."

"Between the time I wrote the one-act in 1990 and when I started to write this new version in 1999, all my grandparents had died. The family farm was sold," Still says. "I went to the big auction at my grandparents' farm where EVERYTHING was sold -- my grandma's wedding dress, boxes of dishes. I bought as much as I could.

"That was a very big emotional experience in my relationship to my family history. ... I really felt the loss, and I really grieved. I've never driven past the family farm since that auction. I just can't."

Despite all his connections to farming, Still really only knew the trade through osmosis. To write "Amber Waves," he rented a car and drove across Kansas, stopping in little towns at tiny cafes where farmers congregated. He talked to them, social workers and employees at food pantries for farmers.

Still did all this legwork because he wanted his play to be authentic. Growing up in Pomona, he saw inaccurate representations of rural Americans in shows like "Green Acres," "Petticoat Junction" and "Hee Haw."

"I think I was hungry to see myself or see someone that I recognized," he says. "I've always been interested in the poetry of ordinary people, that there is a rhythm and a cadence and a use of imagery that is very specific to the Midwest that I find beautiful and as poetic as someone else would find Shakespeare."

The themes, and certainly the content, of "Amber Waves" are complex and serious. Yet Still wrote it for the Kennedy Center's youth audiences.

"I think work for kids needs to be as complicated and as mysterious and as sophisticated as the kids who are seeing the play," he says.

In Washington, most of those kids were black, inner-city school children who'd never even seen a farm.

"What they responded to was a story about family, a family who was having money troubles, a family who were experiencing sort of a spiritual crisis within themselves, potential violence within a family, issues of shame," Still says. "That's universal stuff."

In 1992, the American Alliance for Theatre & Education named "Amber Waves" the Distinguished Play of the Year. It has been performed for audiences of children and adults, but Still's favorite audience -- the one he had in mind when he wrote the script -- is families.

"I was interested in the family as a protagonist, as opposed to one character who was fully developed and everyone around them was more of a supporting character," he says. "I think it ("Amber Waves") filled a desire, a hunger for a kind of play theaters were looking for."

Doug Weaver, a lecturer in KU's theater and film department who is directing the play, says the play teaches a lesson about endurance. At one point, an Olson neighbor who recently lost his farm hangs himself.

"But they persevere," Weaver says of the family. "The Olsons will give all families hope as they respond to adversity and uncertainty with humor, warmth, tenacity and trust in one another."

"It took, for me, enormous courage to write this play because I just didn't think anyone would care," he admits. "It really exposed some of my own shortness of vision, in a way, that I didn't trust the fact that I was passionate about it and that people like my parents would have an impact on audiences.

"So as a tribute to my family, I named the family after them."