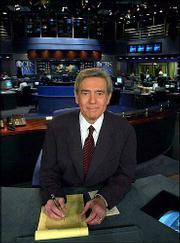 New York — In Kansas City, Mo., it's Kirk Black's job to answer for Dan Rather.

The station manager of KCTV, like his colleagues at many other CBS affiliates, is facing a flood of calls and e-mails from viewers angry at Dan Rather for relying on apparently fake documents to suggest President Bush's National Guard service record was less than stellar.

Whether Rather rides out this storm depends on many factors, including ratings, his specific culpability in the shaky Guard story, a potential successor and even, perhaps, the results of a presidential election.

The opinions of people like Black, whose stations give Rather his national platform, may be most crucial.

"He's part of the face of my television station," Black said, "and people who aren't in the business, they don't separate my local anchors from him. They just see it as CBS. It's very difficult as you talk to viewers and try to explain what your position is and that you had nothing to do with what happened."

Bob Lee, chairman of CBS' local affiliate board and president and general manager of WDBJ-TV in Roanoke, Va., said he had never seen such a viewer response.

Black said he could envision worse -- for instance, if the station cut off the end of a Kansas City Chiefs football game, but not much else.

There are more than 200 CBS affiliates and 16 additional stations, mostly in big cities, that are owned and operated by CBS. More than 1,000 radio stations air CBS News.

So far one radio station -- a conservative talk-radio station in Virginia -- has dropped CBS News because of the Guard controversy.

It's doubtful that any TV stations will try to switch affiliations, primarily because CBS is the prime-time ratings leader.

"Between CBS prime-time and AFC football, you'd be hard-pressed to look for a stronger network," said Gary Gardner, vice president and general manager of WINK-TV in Fort Myers, Fla.

That doesn't mean there isn't deep concern about what's going on at CBS News.

"If there are enough people who watch and choose to turn away from CBS News because of their opinions of Dan, that would potentially force CBS News' hand," Gardner said.

It's too soon to judge whether that's happening. Viewership for the "CBS Evening News" during the week the Sept. 8 "60 Minutes" report on Bush's service aired was down 8 percent from the same week in 2003, according to Nielsen Media Research. The next week, it was down 9 percent.

Before drawing any conclusions, however, note that viewership for the week of Aug. 30 was off 11 percent from the previous year, according to Nielsen.

"CBS Evening News" ratings are falling faster this year than either of its competitors. CBS already is a distant third to NBC and ABC, and the gap is getting wider. Station managers are well aware of this; in many markets the local news is strong and viewers make it a point to tune out Rather.

Few station executives will publicly speak ill of Rather, 72, out of respect for his long and distinguished career as a newsman. They were heartened by CBS' appointment of former U.S. Atty. Gen. Dick Thornburgh and retired Associated Press chief executive Louis Boccardi to investigate the Guard story and want to see the results.

Privately, there's considerable sentiment that "the time has passed" for change, as one manager said.

Station managers say they've encouraged CBS to work on a succession plan, much like NBC is in the midst of with Tom Brokaw and Brian Williams. The Guard story is a complication; few expect Rather to willingly exit under a cloud.

But it's unclear who might replace him, as CBS News has no one so obviously in line as NBC with Williams.