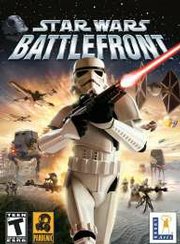 The history of Star Wars-licensed games is somewhat checkered. On one hand, you have the brilliance of games like the Dark Forces series (PC) and X-Wing vs. TIE Fighter (PC), but you also have the dismal failures that were Galactic Battlegrounds (PC) and Obi-wan (Xbox). Now, LucasArts and Pandemic Studios have provided Star Wars: Battlefront, and thankfully it allows gamers to relive almost all of their favorite battles from the entire Star Wars saga so far, playing online or at home.

Battlefront is a game that is a bit difficult to explain if you have not played any of the Battlefield games from EA that are available on PC. Battlefront could be described as a third (or first)-person-shooter that relies on class-based fighters, drivable vehicles and a brand of base-capturing which resembles Unreal Tournament's domination mode. If you have played the Battlefield games before, though, you'll find that the gameplay is basically the same with a few extra twists found here and there. One such twist is the third, indigenous team that can help out one of the teams in the field. So on the Battle of Endor map, there are Ewoks that help out the Rebels, giving them a bit extra help against the muscle of the Empire's AT-STs.

Those wanting a long and engaging single player experience with Battlefront will be disappointed. The single-player game is broken up into two different components: Galactic Conquest and Story mode. Story mode basically takes you through the battles as they occur chronologically in the films, so you start with battles from Episode I, to the battle of Hoth, and eventually to the final showdown on Endor. Each map you can take whichever side you want, whether you want to be the evil Empire, or the righteous Rebels, depending on the maps. The Galactic Conquest mode basically lets you go through all of the planets with one of the factions and play against the computer to eventually control the entire galaxy. There are two maps per planet in this mode, and by dominating a planet, you do get a bonus for the next conflict. This "Hero" bonus, such as Luke Skywalker or Darth Vader, is unstoppable and will help you in your quest for victory. The single-player side of the game does have a few small downfalls. First, it is definitely way too easy. Second, the computer AI is competent at best. Finally, the game gets boring very quickly, since the gameplay is so similar on each map.

That's not to say that Battlefront is a bad game, though. In fact, it's quite good, especially if you are playing online. The online multiplayer allows you to play online with up to 23 of your friends in games with other people. The difference in this mode from the single-player is without a doubt the communication with real people, and the strategy that emerges because of it. Being able to ask for cover from a snowspeeder before trying to take down a base on Hoth is quite exhilarating, especially when the help you asked for saves your skin by taking down an AT-AT that was about to turn you into roadkill. There is also two-player split-screen co-op offered offline, but it suffers from the same drawbacks that plague the single-player modes. The online play is the highlight of Battlefront, and if you have Xbox Live or broadband for PS2, you have no reason not to want to at least try the game out.

Since it has to deal with both on-foot shooting and piloting vehicles, one would think that Battlefront would require a control scheme that rivals something found in most modern flight simulators. This is not the case. Pandemic Studios did a great job of keeping the game faithful to standard third-person shooter controls, but also making it very easy to simply hop into a vehicle with the simple press of a button, and off you go. The Halo-esque control scheme works very well on-foot, whether you choose to use the default third-person view, or the first-person view. The vehicles are easily controllable as well, once you get the hang of them. There are some minor issues; most of which have to deal with invisible ceilings for the Snowspeeders and such, but for the most part, the vehicle control scheme is also simple enough that newcomers will not be intimated.

Visually, Battlefront looks very nice. Not quite as nice as its PC counterpart, but it is very faithful to the Star Wars universe. The characters all look like they should, whether you are looking at the Wookies, the Ewoks, battle droids, Stormtroopers, or whatever; the game was definitely overseen by the Lucas camp. The animation is also very smooth and nice on all of the characters, as well. Laser blasts and the explosions are all very well done, but there seemed to be a bit of slowdown whenever the firefights got too hot and heavy. The slowdown was annoying, but did not happen regularly.

The sound in Star Wars: Battlefront is also top-notch. Every little detail, like the blaster sounds, the AT-ATs, the Ewoks, and even Darth Vader, are all movie-perfect, and really help add to the atmosphere. Throw the John Williams score from the movies on top, and you have as close to an authentic Star Wars interactive experience as you can get without constructing your own lightsaber.

As mentioned earlier, Star Wars: Battlefront is a game that will keep you glued to your screen, as long as you have online capabilities. The single-player game seems like an afterthought, and really hurts what could have been the defining game in the Star Wars universe. However, Battlefront is an extremely fun online experience, once you can find a decent server. Battlefront will keep you in front of your TV for weeks and weeks to come, and possibly even more, depending on how strong the force flows through you.