By By Julia Westhoff / special to lawrence.com 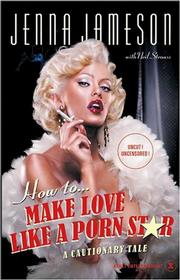 On the one hand, Jameson's absurd lifestyle is so unlike 99.9 percent of the world that we can't help but be fascinated. Her encounters with celebrities and her declaration that stripping made her obscene amounts of money make the pornography world seem glamorous and sexy.

Conversely, Jameson got in to the industry by her own volition, never wanting more than to "become the biggest star the industry has seen." Born Jenna Massoli, Jameson worked her way up from stripping at age 16 to control her own line of adult videos. Despite only having bit roles on E! television, and in Howard Stern's movie "Private Parts," Jameson has managed to make herself a household name.

This may be because Jameson is truly a sex fiend through and through. She claims to have had her first orgasm at age five. Unfortunately, like many others in the sex industry, Jameson's career choice may have resulted from some unwanted sexual encounters. Jameson says she was raped by her boyfriend's uncle at age 16, and by a pack of highschoolers before that. Jenna blames her bad relationship choices on these events.

Her stories of sexual exploits are jaw dropping. She pontificates on the sexual desires of everyone from Tommy Lee (too clingy) to Marilyn Manson (strangely sweet) to Nicholas Cage (emotionally detached). These anecdotes are the backbone of the book, and are probably what most readers will be attracted to.

Jameson's publishers did a wonderful job of laying the book out in an innovative way. Although somewhat choppy, the blend of graphic illustrations, movie scripts, diary entries and verbatim discussions with family members make for a sort of surreal story.

The prose, written with help from New York Times contributor Neil Strauss, elicits feelings of naughtiness and squeamishness, but never pity. Jameson makes it clear that she is a strong, independent woman who made the pornography industry work for her. The result is a fascinating oddly empowering look at the world of adult entertainment.

And of course, there are plenty of pictures.