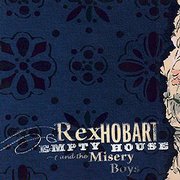 "The Good Ain't Gone" is the title of the leadoff track on Rex Hobart and Misery Boys' fourth album, and it may as well be the mission statement for the band and the entire genre of honky-tonk balladeering.

For the last five years, Rex and his crew have been doing a bang up job convincing the most jaded music listeners that honky-tonk country - the George Jones kind, not the Garth Brooks kind - is alive and kicking. Rex standards like "Make Me Hate You Before You Go" and "Forever Always Ends" would sound at home on the radio next to Buck Owens or Johnny Paycheck, and The Misery Boys have honed their chops into an Opry-caliber thundercloud.

Hobart's country pedigree is one of the most unlikeliest in the biz. As a member of Kansas City math rockers Giant's Chair, "Scott" Hobart played some of the crookest and most non-country riffs this side of the Mason-Dixon Line. But when he heard the call to carry the honky-tonk torch in 1998, and answered it and never looked back (ok, so Giant's Chair did play a couple reunion shows last year).

At any rate, for the last few years Hobart has been following his wife's schoolin' across the country from Buffalo, NY to Santa Fe, NM. Though the Misery Boys all reside in the Kansas City area, the band has somehow managed to stay together, touring ruts up and down I-70 and writing an abundance of new material.

"Empty House" is, frankly, just like every other Misery Boys album. In the cutthroat world of rock, that's called stagnation; in country music, they just call it success. Hobart's signature lyrical trick is "the twist" - a Shyamalan-like moment of catharsis that kicks in right about chorus time. In "Let's Leave Me," it plays out a little something like this:

Rex Hobart and the Misery Boys

THE TWIST: "Baby let's leave me / I'm no good for us / You've got to believe me / Who else are you gonna trust / We can just start over / And forget the fool I've been / Baby let's leave me, and let's start again."

In the hands of a lesser vocalist, it's the kind of lyric that could border on cliche. But in Rex's case, you'll be too busy massaging the goosebumps. Add to that Solomon Hofer's weepy, emotive pedal steel and J.B. Morris's lyrical licks and you've got a tear-greased, Dr. Phil-caliber revival.

More so than Hobart's previous efforts, "Empty House" leans to the dour side of honky-tonk. The blazing two-minute stompers of the band's early albums have been replaced by more mid-tempo ballads and slower-than-sludge weepers. But when it's done so well, there's no reason Rex Hobart and the Misery Boys should ever have to play for an "Empty House."