Wake me up when you travel 12 feet. 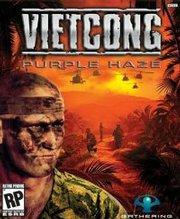 Vietnam is the latest casualty in the wartime experience. Both Vietcong and Eidos's Shellshock debuted on the consoles to bring that different, more horrifying look at war vicariously through the controversial campaign. Gathering's Vietcong, however, is the worst of the two.

Have you ever had that dream where you knew something scary was behind you but you couldn't turn your head? That's Vietcong in a nutshell. Controlling your character and commanding your squad is painstakingly slow. You will "run" forever in many of the levels encountering a bunch of nothing, which may not be so bad except that your squad is substantially far behind you, too busy running into invisible objects, each other or something else inconceivable. Actually, aside from your medic and radio guy, you do have a point man you can have take the lead. But like I said, it's slow, and many times mister point man walks in circles or find new wrong ways to move forward.

So we've established that Vietcong plays overly slow. The combat proves to be almost the same. This has nothing to do with the fact that the enemies are slow, but rather that many of them are brain-dead pushovers. You can literally walk up to some of the enemies and count to five before they'd even raise their firearms. Not to mention that enemies are really hard of hearing. You can shoot 20-25 feet away and no one would seem alarmed. When you shoot them, they show no signs of being shot, aesthetically or physically.

When you combine an inexcusable slow pace with archaic artificial intelligence it really makes for a boring experience. And although Vietcong is indeed functional, it's not a lot of fun to play, despite the unlockable weapons you achieve through the game.

The online component is there for you and proves to be much more fun, which isn't saying much. The maps are actually not bad, the gametypes are plentiful, but the gameplay is among the lower tier of online console first-person shooters. You'd have to be really dedicated to the time period to really enjoy any of it.

The graphics aren't bad. Although many of the textures seem murky, the amount of foliage and well designed levels really set the groundwork of what could've been an enveloping environment. However, there are sporadic dips in the framerate that, ironically, don't happen in heated firefights. The audio definitely has the 70s flair to it, although the many unknown bands may not really capture the time period as well. The sound effects have a very sound bank feel to them. Nothing too exciting, but nothing terrible.

Vietcong: Purple Haze should be reserved for Vietnam buffs only. (Are there any?) It doesn't do anything that hasn't been done five times better by someone else. But if boringly below average is your style, check it out.